I Survived a Nearly Five-Hour Play, and So Can You

As Long as You Follow This Very Practical Guide... 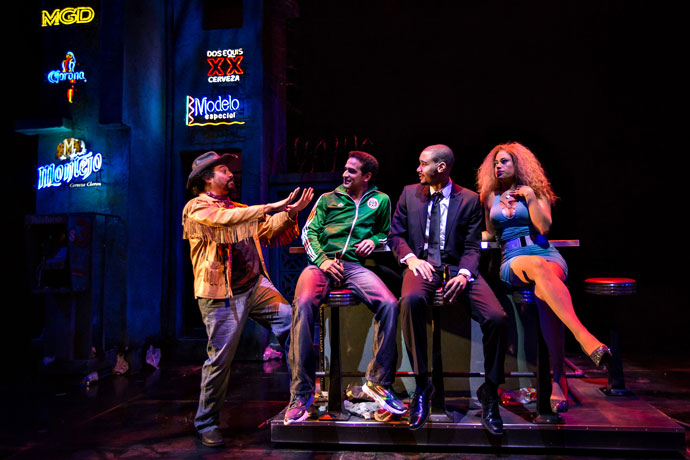 I first came to the late Chilean literary giant Roberto Bolaño in an English bookstore in France. The book was Antwerp—a slim detective novel-in-poetry unlike anything I’d ever encountered. I was too cheap to buy it, so I spent the entire afternoon nursing a single espresso, reading it from cover to cover in one of the bookstore’s black leather chairs.

Since then, Bolaño’s become one of my favorite writers. When I learned the Goodman Theatre in Chicago had adapted his last novel, 2666, into a play, I knew I had to go.

One little caveat: the production is nearly five hours long.

And the book—a globe-trotting epic revolving around quixotic searches for an enigmatic German writer and a serial killer in Mexico—seemed impossible to adapt.

Despite my passion for his work, I wasn’t sure I’d be up for the task. But I went. And should you go, too, you can make the most of it by adhering to this step-by-step survival guide...

2) Don’t be afraid to laugh.
While I wouldn’t call Bolaño a “comic” writer, he certainly has his moments. The adaption, especially in Act I, makes a point of illuminating the comedy in a story that could otherwise feel endlessly bleak. This can seem like a crutch—an apology for the length, or a failure to broach more difficult themes in the novel—but you’ll be thankful for the easy laughs in Act I while you’re enduring the humorless stretch in Act III.

3) Read the program. No, actually. Read the program.
Included is a very digestible biography of Roberto Bolaño and excerpts from his last interview, conducted in 2003, with Mexico’s Playboy. Even as a more-than-casual fan of Bolaño’s work, I wasn’t aware of how cognizant he must’ve been of his own mortality while writing 2666 (which was published posthumously, after a long period of declining health due to a failing liver). Given some primary themes of the book—a quest for artistic nirvana and art’s ability to transcend time—this knowledge necessarily colors one’s understanding of the adaption. (Indeed, the title of the book seems to foretell its place in a distant future, after Bolaño himself is long gone.)

4) Don’t buy tickets to the show, then read like 300 pages of the book, only to arrive and leave after the second act because you don’t want any spoilers.
A friend I went with did that. It was silly. Not to mention, a waste of $35.

5) Instead, read two-thirds of the book years before you knew there would be an adaption, then buy a ticket to the play with the intention of finally figuring out what happens at the end.
I did that. After thoroughly enjoying parts one through three, I put the book down about 600 pages in during the interminable fourth part, which describes, in grimacing detail, a litany of murders in the fictional town of Santa Teresa. Needless to say, it became increasingly difficult to pick up and read before bed.

6) You’ve got three intermissions. Use them wisely.
We used them to discuss, among other things: how the production design in part one (the Part About the Critics) did little to capture the dreamlike qualities of the book; the halfway great performances of minor characters who nonetheless let down the writing; why the play was adapted in the first place; the ways in which, according to my brother and his girlfriend (both thespians), the actors have fundamentally failed to “make choices”; the thankless role of the actress who portrayed the naked dead girl throughout the entire third act; our failure to comprehend the inconsistencies of the actors’ accents, which some affected and some ignored completely; a genuine surprise at how un-bored we were, even after three and a half hours or so; how much Roberto Bolaño would’ve despised the raspberry-vodka-and-lemonade cocktail called “2666” they were hawking at the concessions.

7) Refuse to yield to the increasingly heavy weight lingering behind your eyes, forcing them closed.
Yawn. Do some stretches with your arms. Cross your legs and uncross them again. Also, try not to come hung over.

8) Develop a few cogent takeaways from the massively ambitious production you spent your entire Sunday watching, so that you can properly convey the thing to your friends, who are really just asking about it out of politeness.
“It was an impressive adaption of an almost unadaptable novel.”
“As weird as it sounds, it was a nearly five-hour play that didn’t feel a minute too long.”
“While the production was admirable, the acting seemed like an afterthought.”
“The play wove together the best of Bolaño’s universe: his proclivity toward pulpy detective stories, a kaleidoscopic cast of characters, the outsized meditations on what it means to create art, the porousness between dreams and reality and the ongoing tension between the ineffability of his poetry and the rigor of his prose.”