Is Judd Apatow’s New Series Really Worth Your Time?

Before You Binge Love, You Might Want to Read This 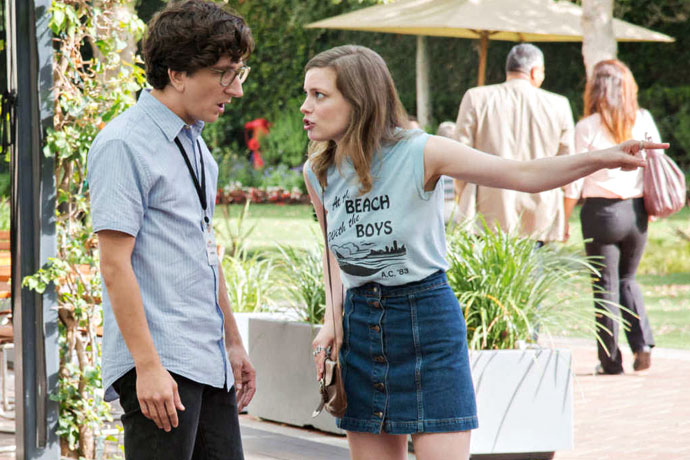 Lot of entertainment out there for you these days. You’ve got your Netflixes. Your HBOs. Your Hulus. Bottom line is, you can’t watch everything. So here’s a little primer to help you decide whether a new show is worth your precious downtime. We take a dip in to see how things are progressing... This week: we check out Love, now streaming on Netflix.

Quick synopsis: Two mismatched thirtysomethings in LA, rebounding from their respective breakups, happen upon each other at a gas station convenience store. Cigarettes are purchased. Pot is smoked. Banter is bantered. Thusly, a misbegotten relationship is born.

How you’ll describe it to your friends: “Well, it’s called Love. And Judd Apatow helped create it. You do the math.”

Why it’s relevant to our cultural moment: Judd Apatow and Amy Schumer did all they could to rejuvenate the romantic comedy with Trainwreck, but the genre has flailed in the age of irony and the Internet. What in the ’90s could be taken as sincere, in the aughts and beyond comes off as treacle. It’s going to be interesting to see how the genre translates to so-called “prestige” television. Then again, there’s a reason you’ve probably never heard of Manhattan Love Story, A to Z or Mixology.

And in typical Apatow fashion, the peripheral characters often prove much funnier than the protagonists. It’s a blessing as well as a curse—part of the pleasure and the frustration of watching the show is resigning to the fact that you are stuck with Mickey and Gus, and not Mickey’s Parliament-smoking neighbor with the kid who won’t stop eating dirt.

What could use some work: Gillian Jacobs’s Mickey occasionally comes off as curmudgeonly, which is not an adjective that should befit an otherwise likable 32-year-old. I wish she’d turn the cynicism down a notch. I also wish she would stop saying “dude” so much, but that’s a personal gripe. (That I wasted an episode and a half racking my brain trying to figure out which one of my friends reminded me of Paul Rust is also a personal gripe, although I’d wager you’ll find yourself doing the same thing.)

More critically, there’s no reason an episode of this show should run over 30 minutes long (the pilot was 40, and the third episode was 37). I’ve never met an Apatow movie I didn’t think was half an hour too long, but his films are so densely packed with jokes that you can almost forgive him. This is not the case with Love. The dialogue lacks punch; rarely did I find my laughter rising above a coughed-up “ha.” And because the central storyline is so tenuous and moves at such a glacial pace (Gus and Mickey are really only on screen together in episode 2), the majority of the show thus far feels bogged down in a series of superfluous subplots.

Episode 3 grade: C-. This episode is what I was referring to when I so crassly wrote “bogged down in a series of superfluous subplots.” To dedicate so much screen time to storylines not involving Mickey and Gus (after they meet in the previous episode) disrupts the pacing of the show. I want to care about Gus’s job as a tutor on a fantasy soap called Witchita, but I don’t.

The three-episode average: B-.

Why it’s worth continuing: The “will they/won’t they” is more like a “they just will.” I’m curious to see which direction the show takes once that happens.

Why it’s not: I don’t need a TV show to vicariously experience boredom, marijuana-induced paranoia, the existential uncertainty of educated millennials and imperfect romantic relationships. I could just simply go about living my own life.