The More The X-Files Changes, the More It Stays the Same

Three Episodes In, Is Fox’s Reboot Really Worth Your Time? 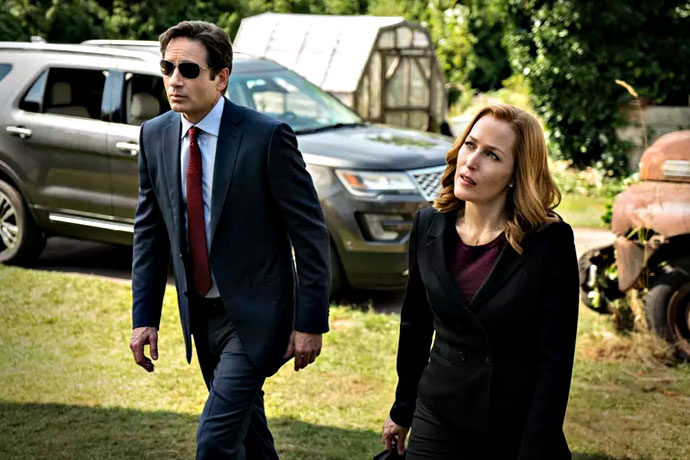 Lot of entertainment out there for you these days. You’ve got your Netflixes. Your HBOs. Your Downton Abbeys. Bottom line is, you can’t watch everything. So here’s a little primer to help you decide whether a new show is worth your precious downtime. We take a dip in to see how things are progressing... This week: we check out the first three episodes of Fox’s X-Files revival to see whether you should bother with tonight’s fourth episode.

Quick synopsis: Fox Mulder (a successfully middle-aging David Duchovny) is still looking for that long-lost, possibly abducted-by-extraterrestrials sister of his, and is convinced everything is a government conspiracy. Dana Scully (the still good-acting Gillian Anderson) remains the pragmatic scientist yet to be convinced everything is a government conspiracy, but willing to go along for the ride. Because there’s a shit-ton of crazy stuff to see and a shot of getting laid.

Major themes: Do-do-do-do-do-do-DOOO. Oh, not that theme? Okay, right. You mean government conspiracy, the suppression of facts and people we don’t understand, the effects of server lighting on moody dark rooms and the superior knowledge of those who dare to question the establishment. Yep, those continue to be things here.

How you’ll describe it to your friends: “The same old X-Files with updated production values and some new spins on the characters. At least for the first episode.”

Why it’s relevant to our cultural moment: It’s basically Fox stoking the crazy theory that our government is using UFO technology to kill us all. Which only crazy people would believe. Fortunately, nobody’s crazy in this country.

What’s good so far: Damn. A huge UFO crashes dramatically in Area 51 in the thrilling first episode. Then there are freaky mutated children and a dude bleeding out of his eyes in episode 2. Then Murray from Flight of the Conchords stalks around in a cheap monster costume in the much goofier episode 3 before engaging in a serious conversation with Mulder about jackalopes. Oh, and the chemistry of the two leads. Will they or won’t they... again.

What could use some work: A heavier hand on the humor button would help undercut some of the darkness and perplexingly dense and logistically improbable plot points. Maybe, just maybe, there could be fewer unknown actors trying to say science-y stuff like they know what they’re talking about.

The three-episode average: B+.

Why it’s not: It could just be one huge black hole sucking you in with no clear resolution as a setup for another movie. Ooh, a conspiracy.