Billions Is About Money, Sex and Power. Then More Money and More Sex and...

Three Episodes In, Is Showtime’s Newest Series Really Worth Your Time? 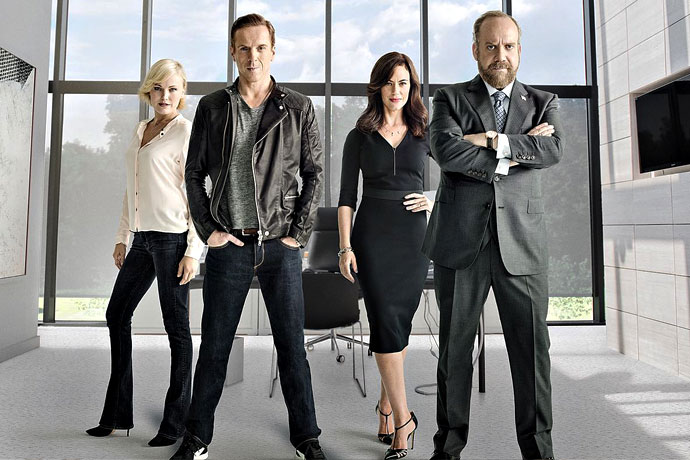 Lot of entertainment out there for you these days. You’ve got your Netflixes. Your HBOs. Your Downton Abbeys. Bottom line is, you can’t watch everything. So here’s a little primer to help you decide whether a new show is worth your precious downtime. We take a dip in to see how things are progressing... This week: we check out Showtime’s Billions, now in its third episode.

Quick synopsis: Chuck Rhoades (Paul Giamatti) is the crafty US Attorney for the Southern District of New York. Bobby “Axe” Axelrod (Damian Lewis) is the beloved, comes-from-nothing head of a mammoth hedge fund, suspected of shady deals. His company’s in-house performance coach is Chuck’s wife, Wendy Rhoades (Maggie Siff). Chuck is trying to indict Axe. So you can see how this is a show on television, now.

Major themes: The outsider versus the establishment; hyper-capitalism and its evils; the flawed reality of the American dream; scatology, specifically as it pertains to jocular office banter.

How you’ll describe it to your friends: “That dude from Homeland plays this billionaire hedge fund guy grappling with some inner torment surrounding 9/11. What? No. I’m pretty sure he’s not a jihadi.”

Why it’s relevant to our cultural moment: Surely, Billions (good) is cashing in on the success of movies like The Big Short (better) and The Wolf of Wall Street (best). Clearly, stories based on the sort of financial elite who helped bring about the recession are recession-proof. Billions may be late to the successful-white-male-antihero-with-a-horrible-secret party, but the scotch is still flowing and the attractive women haven’t left yet.

What’s good so far: The two male leads are magnetic. Lewis’s Axe is a charismatic dissembler, a cipher whose true intentions lie buried beneath layers of charm, swagger and high-end athleisure wear. Giamatti seems to chomp every line; his vicious drive is palpable, but so is his struggle to reconcile justice with goodness. Their diametric opposition is compelling, even without the added wrench of Siff’s Wendy Rhoades: a trusted (and brilliant, and sexy) confidant to the two sworn enemies.

What could use some work: The fraternal joshing between uber-rich traders and high-powered lawyers feels forced, as if the writers were merely approximating other cultural representations of machismo. In other words: we get it. Boys will be boys. So enough with the dirty jokes.

Also, the sex. It’s... different. Like sadomasochistic, ass-to-mouth different. But so far each character’s sexual deviancies read as too-obvious extensions of stock traits. Not that we’re mad about seeing Maggie Siff in black lace lingerie shocking Paul Giamatti with a taser. Because, trust us, we’re not.

The three-episode average: B.

Why it’s worth continuing: Eventually, Wendy Rhoades and Axe are going to get down. And I for one want to be there when they do. Well, at least on my couch.

Why it’s not: The Wolf of Wall Street is immensely more rewatchable.