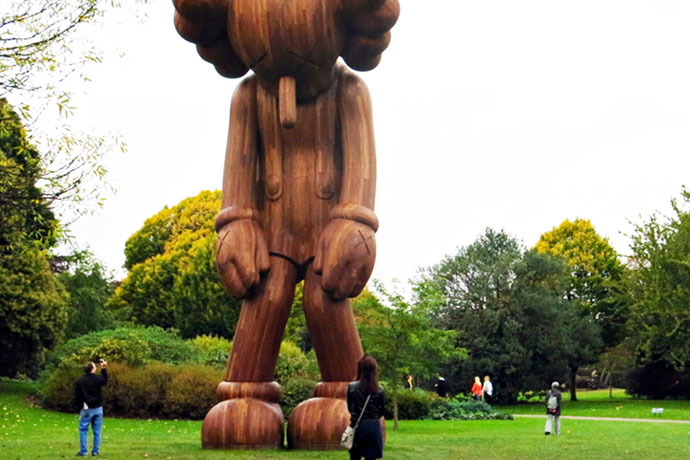 So we peered into our crystal ball to look at some of the galleries, exhibits, museums and, yes, giant teddies to get excited by in the first half of 2016.

What: Kaws
When: February 6 to June 12
Where: Yorkshire Sculpture Park, Wakefield, United Kingdom
Why: The seemingly ubiquitous artist/vinyl toy/MTV VMA award designer (which is definitely not a toy) takes over a Yorkshire sculpture garden with his fabricated teddy bears. They’d be scary if they weren’t so cute.

What: Van Gogh’s Bedrooms
When: February 14 to May 10
Where: The Art Institute of Chicago, Chicago, IL
Why: Opening on Valentine’s Day, this retrospective of his moody single-room portraits is probably the most romantic way to be inspired by Van Gogh. That is, if you like your ear.

What: Matthew Barney
When: February 26 to May 15
Where: Astrup Fearnley Museum, Oslo, Norway
Why: Barney is always sort of interesting. Strange. But interesting. Here he’s reworking seminal works into one new narrative.

What: Reigning Men: Fashion in Menswear, 1715-2015
When: April 10 to August 21
Where: LACMA, Los Angeles, CA
Why: Because you want to pinpoint the exact moment when pantaloons were no longer an acceptable fashion choice so you can build a time machine and stop that from happening. Also: stop parachute pants from happening.

What: SFMOMA Reopens
When: May 14
Where: SFMOMA, San Francisco, CA
Why: After being closed for three years, the museum’s total overhaul will make it the largest contemporary art museum in the world. So that’s got to count for something.

What: Stuart Davis: In Full Swing
When: June 10 to September 25
Where: Whitney Museum of American Art, New York, NY
Why: Because a Stuart Davis work is like jazz in painting form, and this is the first-ever retrospective tying his later and earlier works together. It’s like they’ll be having a jam session.

What: The New Tate Modern
When: June 17
Where: Tate Modern, London, United Kingdom
Why: A 10-story, twisting pyramid dedicated to art will add on to the original power station to give you three levels of gallery and a top-level terrace with 360-degree views of London. Oh, and tons of art.