Fresh vs. Canned: A Totally Necessary Debate About Cranberries 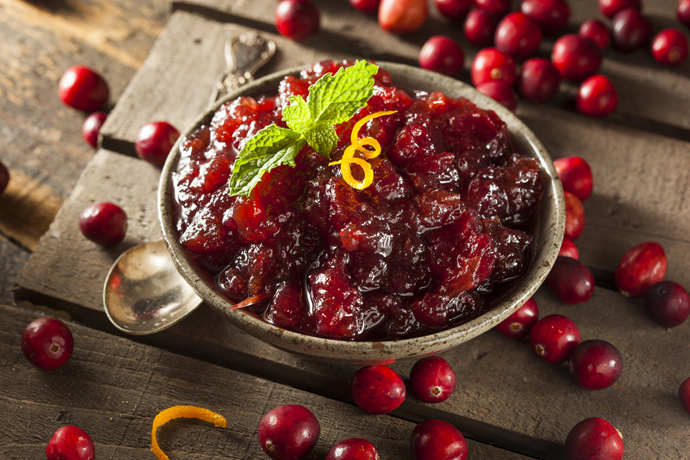 Cranberries will adorn many a Thanksgiving table on Thursday. But which version is superior—the canned stuff or the fresh kind?

To find out, we pitted a couple of UD editors head-to-head (via the convenience of instant messaging) to debate this most important and timely matter.

In this corner: Kevin Gray, a proponent of fresh berries.

In that corner: Kelly Larson, a fan of the canned version.

And below: the debate.

Kelly Larson: Hey. Glad to be here. This Gchat box is nice, but I wish we were in a bog. And I do enjoy eating them on Thanksgiving, but only the fake kind.

KG: I see your fake kind, and I raise you the real kind.

KL:  Most people do.

KG: What is it about the fake stuff that so appeals to you?

KL:  I think it’s just because it’s what I grew up with. My dad always insisted on it. It just became sort of an acquired taste, I guess. A metallic, jiggly, magical acquired taste. Have you ever had the pleasure?

KG: That makes sense. I have had the pleasure, although I’m not sure I would call it that. I have less-than-fond memories of someone cutting this dark red cylinder into slices. It was very confusing and a little damaging to my young psyche.

KL: I can respect that. We always slice it up just so and present it on some type of dish or saucer. It’s definitely a dish, but I just wanted to say the word “saucer.” I believe there was some greenery involved one year, too. Really tied the room together.

KG: Greenery is the fine Persian rug to your canned cranberry sauce.

KL: More like the lipstick to our pig. But it’s our pig.

KG: I grew up eating something called “cranberry salad,” which isn’t so much a salad as fresh cranberries and apples with tons of sugar and some Jell-O. I like the crunch.

KL: I think I’ve heard of cranberry salad. Sounds festive. So does that mean you’re one of those texture people? Is that what puts you in the pro-fresh-cranberry-dishes category?

KG: I do like texture. I’m actually eating some Goldfish right now. The crunchy kind, not the live kind. But I think it’s just a product of growing up with this particular style of cranberry side dish. It accompanies every Thanksgiving and Christmas. It’s traditional for us.

KL: I’m eating Cheez-Its. Hey, we’re both eating delicious cheddar-flavored items, so maybe there’s hope for us after all. But yeah, makes sense about the tradition. And is it weird that I like the little ridges on the canned stuff? I think that makes me weird.

KG: I think you’re right. But I don’t actually know what you mean. Ridges imparted from the actual tin can?

KL: That’s correct. When you open the can and slide the stuff out onto whatever dish, 1) there’s an uncomfortable sucking sound that ensues, and 2) the can’s ridges are visibly imprinted on the cranberry sauce (can we even call it sauce?). At least they are on the right kind. I know it sounds gross, but it’s lovely.

KG: Wow. I’m learning something today. And while I respect every man’s right to partake in his choice of cranberries, you really lost me at “uncomfortable sucking sound.”

Have you ever had the real stuff? And by real stuff, I just mean something made with fresh cranberries, because even my family’s version involves Jell-O.

KL: I have. And I don’t know. I always find the real cranberry sides to be too tart. I had a pretty good one once that was some type of crumble hybrid.

KG: I think we can both agree than a cranberry crumble is a good decision. And yeah, the real stuff is definitely tart, but that’s why you employ copious amounts of sugar. Even with the fresh berries, it’s definitely not a health food. But with my family’s recipe using both cranberries and apples, I like to think I absorb a few nutrients along the way.

KL: Is it, like, your grandma’s recipe? How many generations does this thing span?

KG: The recipe comes from my great grandma on my dad’s side. So it’s stood the test of time. Though to be fair, it’s possible canned cranberries didn’t exist back then.

KL: I think the ancient Mesopotamians invented canned cranberries. I picture them high-fiving each other and laughing at the future as they did. That’s cool about your family recipe, though.

KG: I think you’re right about the Mesopotamians, living in the Fertile Crescent where canned fruit grew like weeds.

KL: Make it gin and you’ve got a deal. I reserve vodka for my gravy.

Food & Drink
Knock Knock, the Wagyu Is Here
You Can Get Pristine Japanese Beef Without Leaving Home