Powering Your Gym with Your Workout 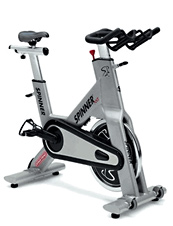 When you hit the gym, mountains get moved. Or at least somewhat respectably sized barbells.

Still, you've yet to experience a workout so intense it actually powers the place. Until now. Introducing the souped-up Green Spinner NXT Bike at Revolution Fitness—which transports all that energy you're generating right back to the gym's power supply.

It works like this—in every spin class, from hardcore to Zen to disco-backed, one of the new StarTrac stationary bikes is now getting attached to a pretty good-sized battery, to be juiced up by all that energy your quads are generating. And so far, the other end has been plugged in to power the mic used by the instructor to yell at you, or the stereo keeping everyone motivated (don't slow down) or…a cell phone. Hey, sometimes you're expecting a really important call.

For now, it's just the one bike in every class (you can reserve it in advance), but the owners are just getting started—ultimately they say they'd love to make Revolution BYOB (bring your own battery), so one day you might be able to bottle up your workout to power anything you like.