Stools Salvaged from the PBR Factory 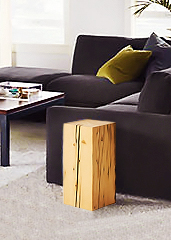 But reclaimed wood from a long-forsaken PBR brewery in Milwaukee... that’s so 1844. And so much more interesting.

Let us explain, as we tell you about Reclaimed Brewery Wood Stools, some old beams from said factory living a second life as your new tables or stools, available now at Room & Board on 14th Street.

Well, it’s now abandoned. How abandoned, you ask. Abandoned enough that National Geographic filmed an episode of a show called Abandoned there.

Anyway, some furniture makers on the banks of Lake Winnebago got their hands on some of the white pine used in the framing and roof trusses, and started finishing it into these clever little blocks, either 18 or 22 inches tall.

You’d do with these just what you’d do with any other sturdy, nicely finished block of wood. Put lamps on them, put your feet on them. Get a bunch and make a giant letter H in your living room. Whatever.

Or put your beer on one.

Gear
A New Hop
The Future of Beer Is... These

Gear
Crane Technique
A Shop with Things for Your Home Bar

Gear
The Paper Chase
Moleskine Is Here. With Notebooks and Stuff.

Gear
Shine On
Bikes, Watches and Leather from Detroit