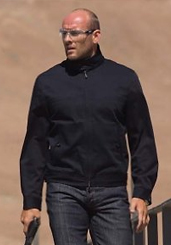 Ben Cooke. He’s what you might call a behind-the-scenes guy. More specifically, he’s the guy who is James Bond’s stunt double. So we sat down with him to chat about Skyfall, broken bones, prank wars with Daniel Craig and, of course, Bond girls...

UD: How did you get into the stunt game in the first place?
BC: I got in about 22 years ago. I come from a fight background and there were a couple of TV shows that came to New Zealand back then like Xena: Warrior Princess.

UD: Wow. Old-school.
BC: Yeah, that was way back in the day. I did that for like 10 years, then Lord of the Rings came along. I did all three movies, then I sort of left, went to Australia and made my way to London.

UD: Speaking of London, you doubled for Daniel Craig on Casino Royale, Quantum of Solace and just wrapped Skyfall. Any memorable moments on set?
BC: Well, there was a whole string of things. A lot of little fun things on Quantum of Solace. Some floor managers on the show got together and photoshopped me and Daniel on the cover of Gay Times in mankinis.

UD: Mankinis?
BC: Yeah, they were about a size too small, it was awful. We looked like a couple looking off into the [ocean].

UD: Amazing. Do you think Daniel Craig is your acting double?
BC: [laughs] Yeah, [but] copy this quietly. No, he’s the boss. Yeah, he’s the boss for sure.

UD: Any hairy moments on set?
BC: You know, a lot of fire and a lot of explosions. All of the [Bond] movies are different on what they require. A lot of car crashes and wire work and bomb control. That sort of stuff.

UD: How many bones have you broken throughout your career?
BC: Probably... maybe like six or seven. I did Zorro and I was doubling the bad guy. I had to fight Antonio Banderas in a sword fight and I broke my left hand. I had to get a cast molded so I could swoop my hand into the cast to hold the sword and I had to fight with a broken hand.

UD: Ouch. What do you think you’d be doing if you weren’t stunting?
BC: Wow, I don’t know. This is the only job I’ve ever had. I think I’d have a little café out somewhere on the beach. Maybe a daiquiri shack or something.

UD: Who’s your favorite Bond girl?
BC: Now that’s tough. How do you choose that? That one where she walks out of the water in the white bikini, that’s my favorite.

UD: Ursula Andress.
BC: Yeah, yeah, that’s right. I like that old-school fire.

Let "The Mr. Porter Guide to a Better Day" Be Your New Life Coach

You Can Take This Giant Balloon to the Edge of Space

Social Distance Like a Champion at This Remote New Zealand Ranch