Bacchanalian Brunch in the MPD 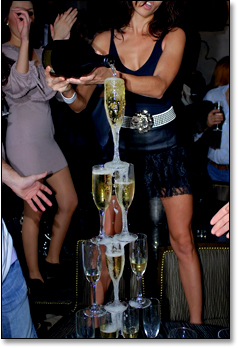 We told you how brunch has gotten a little crazy as of late, but we're gonna upgrade the diagnosis to stark raving mad.

Welcome to "Day & Night," a full-blown midday bacchanal that's been quietly building steam for a while and recently reached peak madness at Meatpacking's Merkato 55.

Saturdays begin innocently: some eggs, some French toast and a ridiculous yellow fin tuna dish. By 3pm, you're four Bloody Marys deep and switching to tequila. The DJ's spinning things in the right direction, the sparklers come whizzing out, and you've moved from the sublime to the ridiculous, rubbing elbows with St. Moritz regulars and publishing magnates, trying to figure out why that tall brunette looks so familiar (hint: she's a supermodel).

But do names really matter when seemingly every table and/or banquette is being danced on when the sun's still out?

And so it goes, a midday escape, a fantasy la dolce vita, a moment away from the outside turmoil, where the only hazards are flying Champagne corks. Once dinner service starts, you're free to transition to evening with what can only be described as the mother of all pre-buzzes, or just follow the tall brunette downstairs to the hidden lounge Bijoux.

With the gray realities of winter setting in, it's nice to be able to see the world through Rosé colored lenses.