The Videos You Never Missed 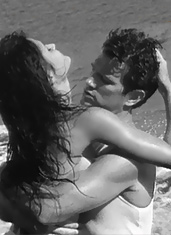 12 Photos Sexiest Music Videos of All Time
Helena Christensen. Alicia Silverstone. The bass player from the “Addicted to Love” video.

All have one thing in common: a deep-seated love of Scrabble. Also: all were introduced to you by MTV...

Introducing the Sexiest Music Videos of All Time, a slideshow of the videos you were always hoping would come on next. (Oh, and we were kidding about the Scrabble thing.)

That’s right, MTV is 30 today. So naturally, we’re looking back over their glory years (the ones where they actually played music) to bring you the reason cable was invented.

On the list: eight supermodels, two extremely honest hips, one glistening golden-era Britney and infinite hair. It’s the kind of stuff you used to have to suffer through a few Hootie or Ace of Base videos to get to in those savage pre-YouTube days.

We’re doing this thing to remind you that there was one shining moment when you could turn on the TV and see Liv Tyler and Alicia Silverstone going on a crime spree... that detoured through a strip club’s amateur night... while they were wearing schoolgirl uniforms... all set to the soaring pipes of Steven Tyler.

The best Take Your Daughter to Work Day ever.

A Minimalist Cabin You Can Put Anywhere