Supermodeling Maids of the World 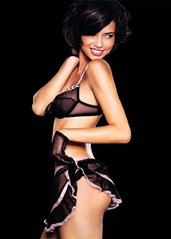 11 Photos French Maids of Bastille Day
That smell of pinot noir and brie in the air—yes, it’s the smell of independence. French independence.

As you undoubtedly know from the circled “14” in your calendar, tomorrow is Bastille Day. And we’re celebrating with a tribute to what is probably France’s most heroic contribution to international culture...

Introducing the French Maids of Bastille Day, a delightful little slideshow that combines some of the world’s most beautiful women with the French maid costumes they were born to wear.

What you’re in for: supermodels, one of Leonardo DiCaprio’s old flings (also a supermodel) and, of course, Brigitte Bardot. At some point, you might be thinking to yourself, “Sofía Vergara... That doesn’t sound like a very French name.” But squeeze her into one of these tasteful little numbers, and she may as well be strolling down the Rue de something or other with a beret on and a baguette poking out of her burlap grocery sack.

And because we’re here to educate, we’ve handpicked a few variations of the iconic outfit. You’ve got your traditional black dress and white apron, all the way to versions that might lead you to believe the line between French service professional and woman of the dominant persuasion has become razor-thin.

It’s the best news involving “French” and “maids” in months.