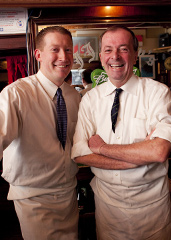 Your green shirt: laid out. Your morning milk: dyed. Your shillelagh: polished. But before you embark on another epic St. Paddy’s Day tomorrow, we figured you could use a few pearls of wisdom from a March 17 expert. That would be Jerry Foley, third-generation bar god at J.J. Foley’s (shown here with his son Michael) and a man who’s poured his way through 42 St. Patrick’s Days in Boston.

UD: What should people do or not do on St. Paddy’s?
JF: Just treat everybody with respect. That’s all. Be respectful. Bartenders are respectful if you are.

UD: Speaking of respect: how do you keep your girlfriend’s ass from getting pinched?
JF: Her ass is gonna get pinched no matter what. Big crowds, everybody’s partying, it’s gonna happen. Tell your readers not to take any offense to it. It’d be worse if they didn’t pinch her ass.

UD: What’s your secret to going out all day without getting really twisted?
JF: Drink a lot of water. Or you won’t survive. We have a very signature drink here, it’s called Jameson and Guinness. Drink that with water all day and you’ll be lovely.

UD: What’s your best hangover cure for the day after?
JF: Best thing to do would be have a big, sloppy, greasy breakfast—sausage, bacon, some scrambled eggs. Hopefully it all stays down. And then maybe have a Bloody Mary, or a Hennessy Stinger—Hennessy, brandy and a little sweet crème de menthe. Then go to bed for three hours, and go on about your business.

UD: How did your parents celebrate St. Paddy’s?
JF: St. Paddy’s was mass and communion at the Holy Cross cathedral in the South End. They’d go to mass, go home, cook a boiled dinner, have some relatives over, and that was the extent of it. It wasn’t a big Mardi Gras, fahkin’ yahoo time, you know? It was more of a religious holiday.

UD: What was Boston’s finest era for St. Pat’s?
JF: Probably when James Michael Curley declared it a holiday in Suffolk County. Called it Evacuation Day. That was probably in the ’40s. He was mayor of Boston, and he declared it a holiday, but the powers that be at the time weren’t all Irish Catholic, so he called it Evacuation Day and got around it. Curley was a great man for the Irish.

UD: Who’s your favorite Irish lass of all time?
JF: Oh god, that movie The Quiet Man had Maureen O’Hara. Classic movie, came out in the early ’50s. It was John Wayne, another famous actor and Maureen O’Hara. Probably one of the greatest Irish stories around.

UD: What’s great about Irish women?
JF: [laughs] How can I say this since I’m married to one? Best thing is they’re the best. Lots of patience.

UD: How long you been married?
JF: Thirty-five years, to an Irish-American woman, seven children. I met her in a club in Jamaica Plain back in the day. She brushed me off, didn’t want to have anything to do with me. [laughs]

UD: And somehow the Irish charm won her over.
JF: And 35 years later, we’re still at it.

UD: Any last words for someone heading out into the madness on St. Paddy’s Day?
JF: Start early, go home early.