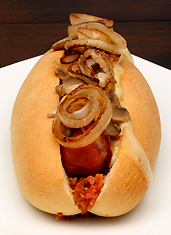 And while we don’t want to alarm you, Oktoberfest started this past weekend. Okay, you should be alarmed...

Just in time: Brats, a tiny launching pad for Oktoberfest, and new go-to sausage bar, cranking out the wieners starting this Saturday in Chelsea.

Quick warning: Brats looks more like a 1950s soda fountain than a sprawling beer hall—it’s a sliver of a space with bright red stools, a wood bar and some standing room against the wall. Don’t be fooled. This place is all about sausage and booze on tap (but we’ll get to that in a moment).

Let’s talk meats: chef/owner Daniel Angerer (Klee Brasserie) is Austrian and has a potentially dangerous fascination with encased meats (the pizza of Austria, as he calls it). Which means that every wiener, brat and dog is a house recipe, made without preservatives, using exotic meats (Mangalitsa pig, duck, shrimp), left-of-center toppings (the Dragon Wiener is a pork sausage draped in spicy kimchi and sriracha mustard) and a smattering of Austrian sternness.

And sure, you could wash your tube steak down with a tobacco-infused milkshake, but Brats also has wine, sake, grappa and port on tap.

Prepare yourself for the three-port lunch.