Prohibition-Era Partying in a Barber Shop 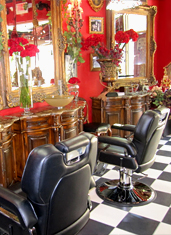 No, we’re not talking about Boardwalk Empire.

First, let’s get you a few facts about the place. It’s a lot like the original shop in Coral Gables, but bigger. Walking in, you’ll notice the trademark red walls, oversize mirrors and barbers sporting black vests and bow ties. But instead of four barber chairs, you’ll count seven of them.

All your favorite services are here—$20 haircuts, hot-lather shaves, straight-razor shaves. You can get your head, neck and shoulders massaged at $1 a minute, as well as shoe shines and hand treatments. And to loosen you up a little, you’ll be offered a shot of whiskey or vodka before your cut.

As for tonight’s party: you can look forward to half a dozen cabaret dancers and complimentary vodka and rum cocktails, plus food from nearby restaurants like Balans and Rosa Mexicano.

Style
Brickell's New Bespoke Suitery Has a Whiskey Lounge
It's Called Stitched, and It Would Like a Word With Your Body

Style
Come, Journey With Us to Kith
It’s Got Stuff for Your Feet, Your Torso and Your Taste Buds

Style
Rise and Shinola
Watches and Bags and Bikes in Wynwood

Style
Suit Yourself
Tailored Suits in a South Beach Penthouse