Zip-Lining Along the Embarcadero 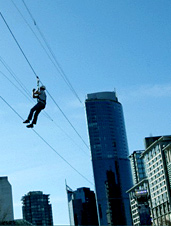 But what if—with a little imagination, and some Canadian ingenuity—those very same buildings acted more like tall trees. And you could soar from one to the other like some sort of urban aerialist/Spider-Man combination.

Well, that time is now.

For the next few days, an inch-and-a-half thick, taut gondola cable perched eight stories above the Embarcadero will be your best bet for letting off some steam, grabbing a bird's-eye view of SF or just getting from one end of Justin Herman Plaza to the other at 50 mph (why walk when you can fly).

For some reason, the good people of British Columbia took it upon themselves to grace us with their zip line—normally reserved for the jungles of Costa Rica, the lush valleys of Kauai or the treetops of Whistler—making San Francisco the first city outside of Vancouver to offer urban zipping.

All you need to do to get airborne is head over to Sens in the Embarcadero Center, get harnessed in, and you're ready to go.

Think of it as one small step for mankind.