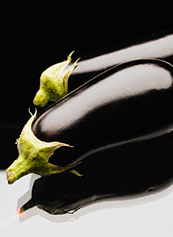 Understanding these basic tenets of culinary arithmetic (and the fact that booze always makes things better), we bring you Chocolate Grand Marnier Eggplant, a new off-menu dessert available for a very limited time from the Peruvian lords of Taranta.

Like many of the finer indulgences of this world, this concoction is a tradition that began with some monks, who had a curious habit of dipping slices of eggplant in liqueur mixed with herbs, spices and sugar. Once chocolate was brought back from the New World in the 16th century, the people of the Amalfi Coast began doing the same, only using melted chocolate (reportedly known as the Amalfi Monk-Dip Remix).

Fast forward to New England in modern times, and you have Taranta chef Jose Duarte and his wife (who comes from the Amalfi Coast) smashing the two traditions together by deep-frying thinly sliced eggplant to a golden brown, then piling each slice with melted Peruvian chocolate, nuts, orange zest and a healthy drizzle of Grand Marnier. The result is a salty-sweet, rich and spongy creation with roots stretching back to the Middle Ages.

And as close to monastery life as you ever want to get.