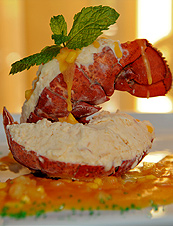 No, we're not kidding.

We know it seems to violate some unwritten universal law regarding combinations of independently enjoyable foods that should never be together (known as the "oysters and raisins mandate"), but trust us, this is one bit of crazy that totally works. Cue drumroll...

Like any self-respecting lobster dish in these parts (ice cream or not), it starts with fresh Maine lobster. Peppino then grinds it up with milk, heavy cream, sugar and vanilla, creating a thick and decadent gelato that's placed before you in a chilled lobster tail shell.

But you know you're in truly new waters when you get to the sauce. Drizzled generously over the groundbreaking gelato is a cool, butterscotch-colored topping made from the lobster's broth, strained and then sweetened up with honey, chunks of mango and, oh, about a pound of butter (it is lobster we're talking about here).

When savored together and washed down with a sidecar of citrusy Grand Marnier (chef's pick), the whole thing may cause you to skip doing lobster and dessert the old-fashioned way, which is to say, separately.

This may have broader socio-political impacts that we don't even realize yet.