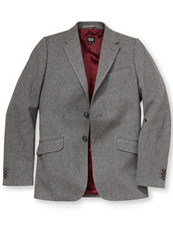 Starting small is never a bad thing. As long as it's just a start.

More on that later—but first, the clothes. Spade wants to give you modern updates on classic, all-American looks you need to get through a whirlwind day in the city. To wit: well-cut suits sold in pieces or as a whole. Cashmere cardigans. Button-downs of Egyptian cotton. All of which conspire to show you off as a no-fuss rake who cares about such things without actually, you know, caring about such things.

And while you're at the apartment, you might also want a cork-handled bike, a chocolate bar named after the La Brea Tar Pits, random goods they found with a metal detector…and some paintings by their obvious muse for all this, Phyllis Diller. Really—she paints. They love her works. So they'll be on the walls.