A Top Secret Dining Club in the East Village 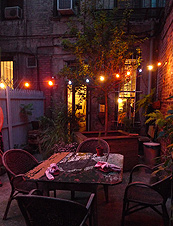 Sure, you have your well-crafted arsenal of go-to date spots: the casually cool French bistro for the first date, the sexy-chic sushi joint for the second.

But for that all-important, make-or-break-it third, you need somewhere that's off the charts—or at least off the grid. An option that shows you know your way around New York's hush-hush world of clandestine dining.

When such a case arises, your ace is Cardinal Club, a top-secret dining club now accepting applications for reservations.

The first thing you need to know about the Cardinal Club is that there is no Cardinal Club—at least officially. But if you are a friend, or a friend of a friend, you can gain admittance to this secret garden for amazing multi-course meals served under the stars. (And not that you need us to remind you, but if you do get a reservation, remember to be on your best behavior—you can misbehave later.)

It begins like any good spy thriller: with a text message, sent just a few hours before your reservation time, telling you the address. Once you're there, you and your date will enter a nondescript apartment building and be whisked through a bohemian flat, into the romantic East Village garden you've always dreamed of—only this time with your own personal chef and server.

When the subterfuge subsides, you'll be treated to an exquisite feast prepared with in-season ingredients like Dungeness crab, Roman artichokes and (per the menu) "love." And we should mention it's BYOB, so you can finally dust off those Lafites you've had stashed away since before the crash. A few glasses in, your date will be gushing that, once again, she believes that New York is a magical place.

In other words, the fourth date will probably be over breakfast.