The State of Miami Karaoke

Turns Out, Singing Into a Mic Is Only Half of It 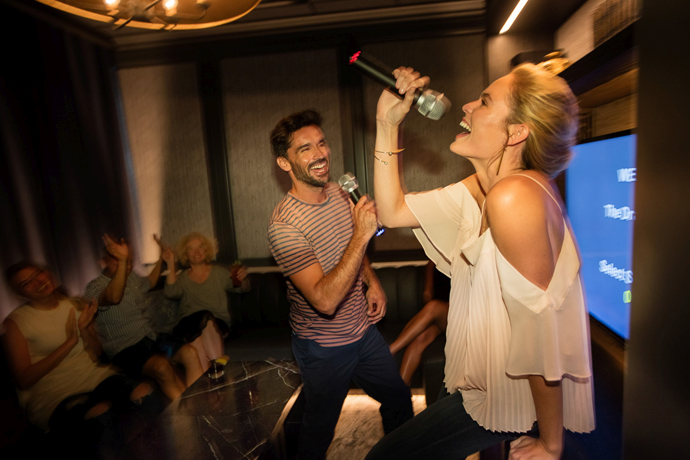 Karaoke in Miami isn't just about grabbing a mic and belting some Journey into it.

It's about all the things you can do before, during and after your big moment. Be it bowling, buying vintage vinyl or building up a little courage in a hidden cocktail lounge. Yes, there's more. So much more that has nothing to do with singing on key.

Indeed, the state of Miami karaoke is strong. Let's investigate...

The One With 18 Rooms
You'll come for PlugIn's 18 themed rooms (including one that looks like a recording studio), its 35,000-song digital catalog and its concert lighting. But you'll also come for its piano-bar-turned-lobby-bar, where magical elixirs help you reach all the high notes. PlugIn, 801 Silks Run, Ste 2597, Hallandale, 844-475-8446

The One With the Food Hall. And Everything Else.
When your vocal cords need a break from the 14-language catalogue in the private room, wander into 1-800-Lucky's Asian food hall, or its record store, or its convenience store, or its outdoor patio bar with DJ-spun tunes and frozen beer. 1-800-Lucky, 143 NW 23rd St, 305-768-9826

The One With the Bowling Alley
Few places let you bowl and drink Nutella-and-Frangelico shakes once you tire of singing '80s hair band hits against a backdrop of lava lamp walls. Kings Bowl is one of those places. Perhaps it's the only one of those places. Kings, 3450 NW 83rd Ave, Ste 152, Doral, 844-494-9400

The One With the Live Band
Video evidence of that time you sang with a live band in Faena's dramatic theatre cloaked in red velvet on a once-a-month Tuesday night exists. Video evidence of you singing into a hairbrush in the days leading up to your big performance, thankfully, does not. Tuesdays, once-a-month (days vary), Rock the Mic at Faena Theatre at Faena, 3201 Collins Ave, Miami Beach, 786-655-5600

The One With the Arcade
It's Monday night. You sang a Bon Jovi song with a live band backing you up. Now, sit back and relax with drink specials, a few rounds with the vintage arcade games and a slice of Artichoke Pizza. The karaoke is more of a formality, really. Mondays, 5pm-2am, Ricky’s, 1222 16th St, Miami Beach, 305-704-3602