Yet Another Handsome Bar from the Sportsman's Club Guys 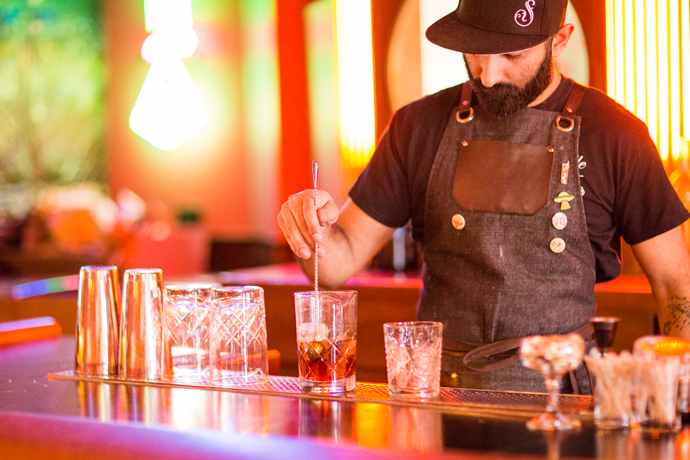 The barmen behind Sportsman's Club are at it again.

Give them a run-down watering hole and they'll turn it into gold.

They just can't help it.

This time, their mission takes them to Avondale and an old-turned-new bar and beer garden dubbed Ludlow Liquors. It's open now, so take a look.

They're calling it an "East Village-inspired cocktail lounge." You're calling it, "that place that used to be Orbit Room." You're both right, which means a handsome, vintage bar lined with caramel leather and just the right amount of taxidermy birds.

In addition to some new booths, which have a Mid-Century Mod thing going on, partners Jeff Donahue and Wade McElroy developed an entirely new cocktail menu. No, an entirely new way of serving cocktails. Grab a corner and get acquainted with cocktails by the ounce. Start with one ounce of the rum and rhum Escapist, followed by two ounces of the mole and mezcal Delicious #7. Then, end the night with a three-ounce bitter Sportsman.

Maybe this whole things is reminding you a bit too much of their other taxidermic lounge. If so, allow Old Habits, the built-in culinary concept, to shake things up. Go ahead and have that fancy cocktail and pair it with smoked rib tips served with house-made flour tortillas and a side of fries accompanied by warm beef gravy and cold malted vanilla gelato.

Didn't see that gelato dipping sauce coming, did you?