Eat Pizza With Funny Names in What Feels Like Grandma's Kitchen 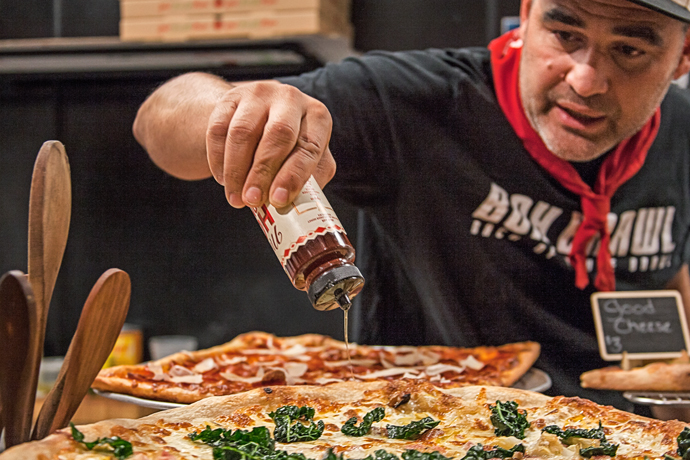 You'll have the Good $hit.

Or make that the Good, the Rad and the Gnarly.

What the hell. Have both.

There's a strong grandma's kitchen vibe here, only with that red-and-white, pizza-place color scheme. Photos of random nanas adorn the walls, when they're not covered in wooden spoons, pizza peels and vintage slice cutters. While the sounds of Sinatra, Elvis, Dino and other dead (or nearly dead) people fill the air.

You'll drop by with a group of friends before, between or after drinks. First thing you'll do is smell the baking pies, all thin-crusted and covered in high-quality ingredients, along with housemade sauce. Then snag one of the eight stools at the counter and order.

You could do the square, lightly sauced Grandma-style pie. Or the Good Good with artichoke hearts and sausage. Then there's the matter of the Good $hit, which has mushrooms with caramelized onions and truffles. Which you'll do with the Good Knots, coming with three kinds of garlic and sauce.