They're Flying Fish in From Japan on the Daily 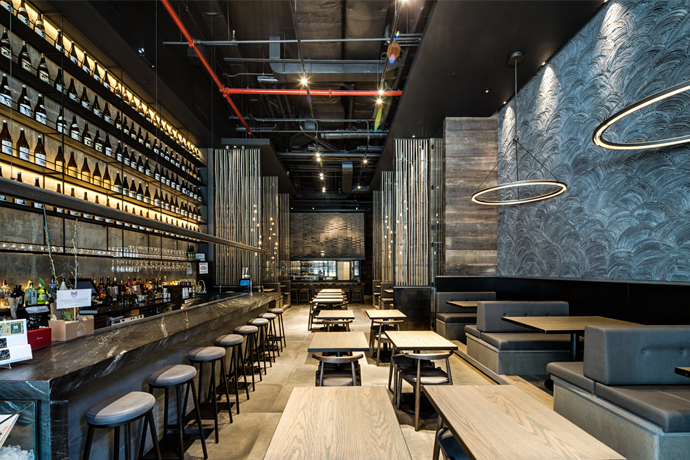 Ladies and gentlemen, Wokuni is now open. It's the first American outpost from a Japanese restaurant group already killing it in Japan, and it's now open in (a, sure, otherwise-pretty-lackluster part of) Murray Hill.

But this spot's worth checking out. Looks-wise, it's a cavernous space, flush with shades of gray and silver, with thick marble slabs as tabletops. It's very modern and vaguely nautical, with white ropes separating tables and dark wooden beams lining the walls, textured wave-print wallpaper and artfully placed bricks above the sushi bar that call to mind rippling waters—or maybe a school of fish, or maybe all this fish talk is just getting to our heads.

Below, we've boiled the rest down for your Monday-brain, bolded sentence style. Here goes...

The team behind this spot: Tokyo Ichiban Foods, who operate 50-plus restaurants throughout Japan, and raise their own fish in their Nagasaki aqua-farms.
They fly over Bluefin Tuna and King Yellowtail fish from their own farms and seasonal fish from local Japanese regions daily. So if you're wondering why the sashimi platters here are surprisingly better, and surprisingly less than other sashimi platters elsewhere, that's why.

The idea here: To make fresh fish a more accessible, increasingly integral part of New York life.
You might swing by and pick up some fresh tuna at their front retail space. You might come by afterwork for sake and sweet soy-marinated Yellowtail. You might bring a date and make sure they order the sashimi, which features salmon twirled into rose-shapes and flower garnishes.

The move, drinks wise: Sake. The good stuff.
Now's your chance to try Dassai Beyond from Yamaguchi, or Bon Yumehamasayume from Fukui. Both gems. Unlike the sushi here, both a little tough on the wallet. But we're firm believers in finding a balance, so...

The musts, sustenance wise: Anything involving their home-farmed Tuna or Yellowtail.
Like yellowtail carpaccio with yuzu citrus pepper sauce, or tuna tail steak with teriyaki sauce. And then they've got miso-marinated cod, unagi sea eel and cucumber, lightly roasted washugyu beef, a whole lot more. Check out their menu here.

Let's throw it over to the slideshow, for a few images, and we'll call it a day.