The Bacon Omakase of Your Pork-Related Dreams

Because Bacon’s Making an Elegant Comeback, With Nine Courses 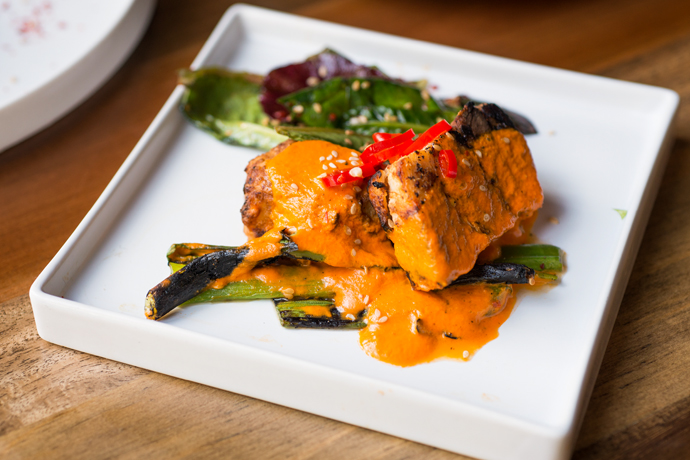 8 Photos Belly
Some five-ish years ago, you may recall, the bacon industry was flourishing. Pork enthusiasts around America flocked to Sunday brunches, their minds spinning with visions of thick-cut applewood-smoked slabs. Meat-lovers squealed with excitement when ice cream makers introduced bacon-laden flavors. The sweet-and-savory juxtaposition was still fresh. Bacon-topped burgers still incited a healthy drool in the majority of consumers. The world of bacon seemed new, exciting, full of possibilities.

We all got fucking sick of bacon.

But now, there’s Belly. Belly is a new Korean bacon-centric restaurant that’s doing actually-interesting things with the stuff, and also has a subterranean karaoke bar for some reason. It’s now open in Williamsburg.

By actually-interesting things, we mean bacon omakase. That’s right, bacon is elegant now. (The founders are Korean with marketing backgrounds, apparent in their creation of bacon omakase.) You can go a la carte, but you’ll probably want to opt for the nine-course menu which involves such delights as bacon carpaccio with truffle oil, bacon sushi, housemade spaghetti with pork sausage in creamy kimchi sauce, and gochujang-glazed pork belly. Dessert comes in the form of bacon fat whipped cream-topped sweet kimchi-iced doughnuts, so yeah, you’ll be making room if you’ve got none left by that point. Here’s a slideshow, which will inspire such thoughts as, “Damn,” and “What’s that, though?”

When the courses stop coming, head out to acquire some liquor and then march straight down stairs to Beats, their 12-room BYOB karaoke bar.

And that just about does it for us today.