Sweat It Out in Sweden’s Golden Sauna Egg

And Eat Some Crepes While You’re At It 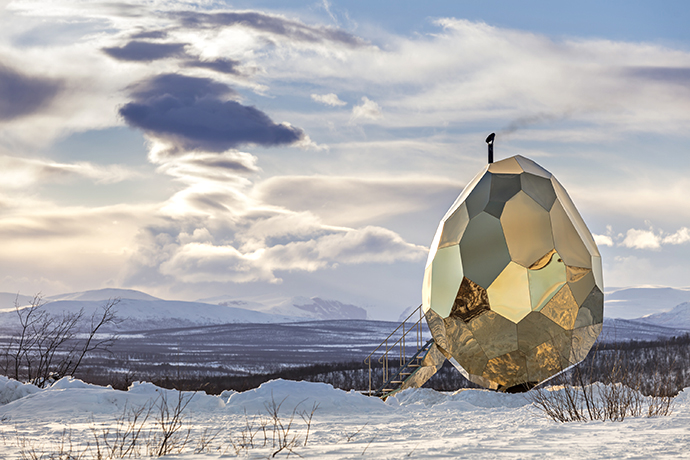 What do Willy Wonka and a couple of Swedish artists have in common?

We won’t keep you guessing. It’s chocolate, avant-garde speed metal, and an affinity for golden eggs.

But about the golden egg: there’s one currently making the rounds in Northern Sweden, and it’s designed to keep you toasty on that nation’s snow-covered mountains. It’s the Solar Egg, and it’s a golden sauna in the shape of an egg.

The Solar Egg is the creation of Mats Bigert and Lars Bergström. The difference between this and the flying pod we hope eventually launches the president into high orbit is that it contains a heart. More specifically, it contains a heart-shaped stove, which, again, sauna. The egg’s lights are powered by the sun and that stove is powered by, well, wood.

Apparently 69 gold-plated panels is just enough gold-plated panels to capture the glint of the blue skies and still waters of its current resting place in Luossavaara, as well as its summer home on the banks of a lake in Nikkaluokta, because that’s how many it has.

You can use the 69-gold-plated, solar-powered, wood-burning, golden sauna egg of Sweden (just had to write it all out like that) gratis when you purchase an Off the Map Arctic itinerary. But if so inclined, you can hand over a few krona and they’ll add crepes and assorted meats and cheeses to the deal.

Just what you want to sit in a 150-degree sweat mausoleum with.