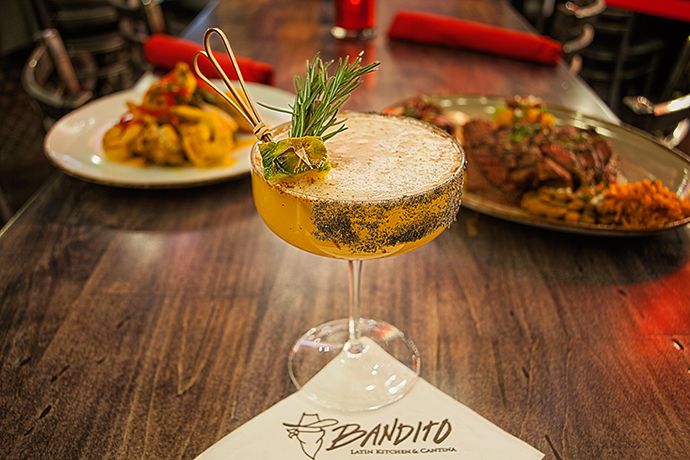 15 Photos Bandito
Does a micheleda with barbacoa broth taste weird?

And is a salad composed primarily of succulent chunks of chicharron really a salad at all?

The answers to these enticingly random questions lie at Bandito, a colorful and spacious Mexican-forward Latin cantina where nothing is quite as it should be, because it’s better. It’s open now just off the Strip, and here’s a sneak peek.

You’ll know you’re in the right place when you’ve passed the hand-pressed corn tortilla station en route to a sleek gray-and-black banquette under a sizeable mural of a woman with a rose. Slide in. Request their margarita garnished with a lime injected with Grand Marnier. Take a sip.

Ah. It would seem as if you’ve made it.

The enchiladas are baked with jalepenos and cheese inside, and the meat on the outside.

The micheladas have housemade barbacoa broth.

The potatoes are prepared al pastor.

Chorizo is on the menu, yes, but it is made into salsa verde-topped meatballs.

And we both know you're powerless to resist meatballs.