One More Time for Empire Diner

This Time With John Delucie and the Cafeteria Team in Tow 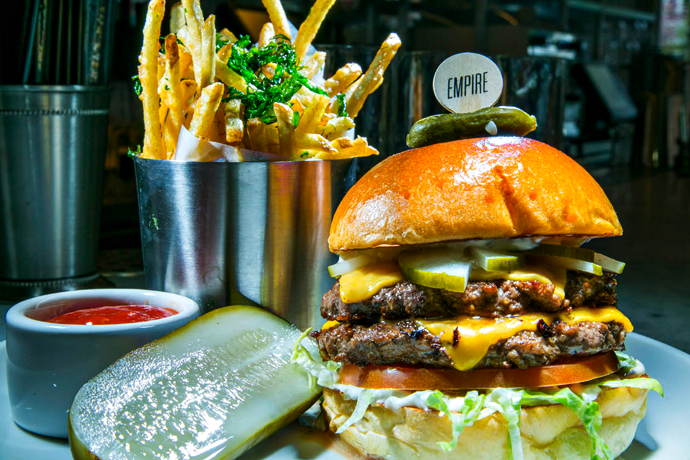 18 Photos Empire Diner
From chef John DeLucie and the team that brought you Cafeteria, here’s a hopefully-successful revival of Empire Diner, one of the last freestanding diners in the city, open now in an ever-more-promising Chelsea.

The vibe here is diner-y, but also not; just as the food here is diner-y, but also not. It’s like a diner has put on its Sunday best in all regards. The space is all tan leather banquettes, blonde wood booths, a number of notable floral arrangements, and way more seating than you’d expect at first gander (note the second floor in a seemingly-one-diner-cart space). Use it for weeknight dates. Use it for casual meet-ups for sage-honey piscos at the marble-topped bar. Use it for any time you want a good burger in an upscale ’80s-feeling diner cart.

By now you know the food comes from one John DeLucie, and you probably know the name. But if you don’t, he’s behind The Waverly Inn, The Lion, Bedford & Co... and now, behind all the sourdough-pretzel fried chicken, double-decker aoili-topped burgers and crispy artichokes flying out of this here open kitchen.

Now, such things are better when consumed visually, so let’s make that move right now.

And may your Monday be everything you dreamed it would be.