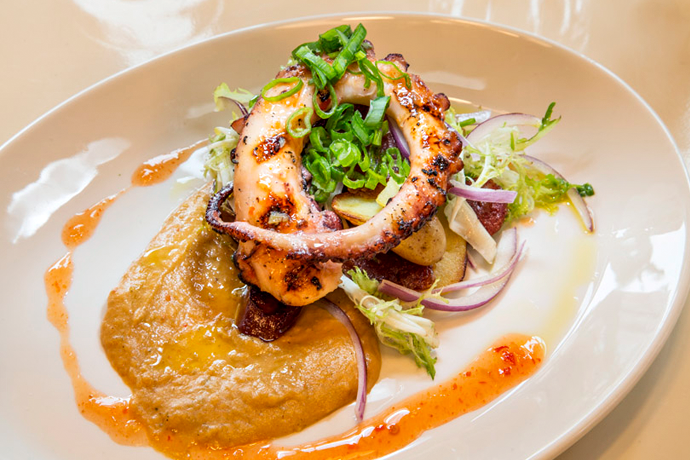 You’ve got to love New York. So much so that you even live here. But it’s nice once in a while to enter a place that looks like it could be in, say, modern-day Downtown LA. And this could do that, with its potted palms and bench-like banquettes, and its giant mounted mirror giving the illusion of real estate. What we’re saying is, it’s on the sultry side.

It’s also pretty versatile. The sultriness will lend itself to successful dates, the casualness to the around-the-corner pop-in. Whatever your use, you can expect a chef who used to be at Red Cat (one of Chelsea’s other few top-notch neighborhood spots, God bless it) preparing chili charred octopus with Chinese sausage, or tuna crusted with the “everything” of an everything bagel, served with grilled avocado. You can see those both here.

Backing up a little bit, though, it’ll be good to arrive here a cocktail’s worth of time before whoever you’re dining with. First, to get comfortable and establish yourself early on as a favored regular, and second, to see what effect aloe liqueur has on tequila, lime, cucumber and mint in the Down the Shore.

Once cocktails and dinner are behind you, bear in mind that the daily dessert special was baked by two of the partners’ mother before you consider passing.