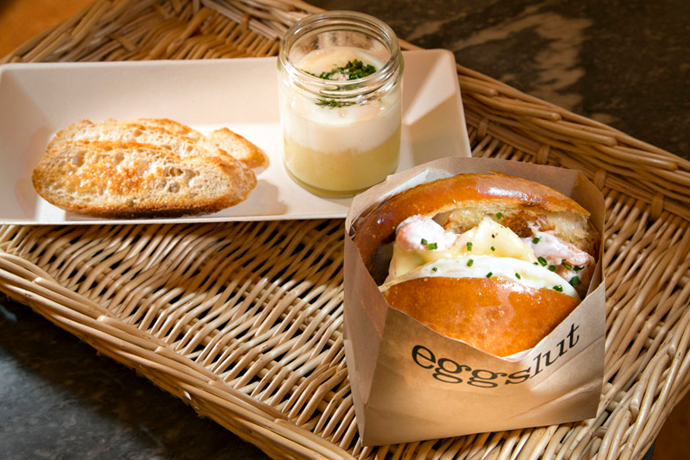 17 Photos Honeygrow and Chefs Club Counter
We’re truly living in a golden age of foods you can get really quickly that are better than the foods you used to be able to get really quickly. The term they like to use nowadays is “fast-casual.” You’ve heard this. We think it’s a little corporate ourselves, but, hey, they don’t always consult us on these things.

What:
A highly efficient and automated quick-grab or hurried-sit lunch and dinner enterprise. It’s set up for you to enjoy all manner of stir-fry and salad, along with fresh fruit cups topped in such ways as to make them more like loaded ice cream scoops. Take a look at foods and the place here.

Who:
A consortium that’s already captured the hearts and stomachs of eaters in DC, Philly, et al.

Where:
Downtown Brooklyn, near Borough Hall.

Why:
Possibly the first-ever pastrami stir-fry, which is, as you’d expect, only here. Also, either in a quest for convenience and expedience, or a nefarious plot against making America great again, they’ve elected to have the whole ordering and paying process done via touchscreen.

What:
A bright, sexier spot that might tempt you to have a seat and stay awhile rather than just take to go. Ultimately, though, you’ll mostly go. This will operate on a residency basis, so it’ll be an oft-rotating cast of high-profile chefs and visiting restaurants. Take a look.

Who:
Right now, we’ve got Jean-Georges, George Mendes, Magnus Hansson (late of ABC Kitchen) and Eric Kayser. The current highlight, though, is LA’s much-adored Eggslut, so make sure you give those guys a warm welcome in hopes of them opening up shop permanently on our humble coast.

When:
All three officially recognized meals (until 8), starting tomorrow.

Why:
It’s your best opportunity to spot a Hadid sister going to town on coddled egg on top of potato puree with gray salt and chives, served with baguette (known affectionately as the Slut), before going to town on the same yourself.

We thought “because we said so” would be poorly received.