Pizza-Sandwich Frankensteins Straight Out of Rome 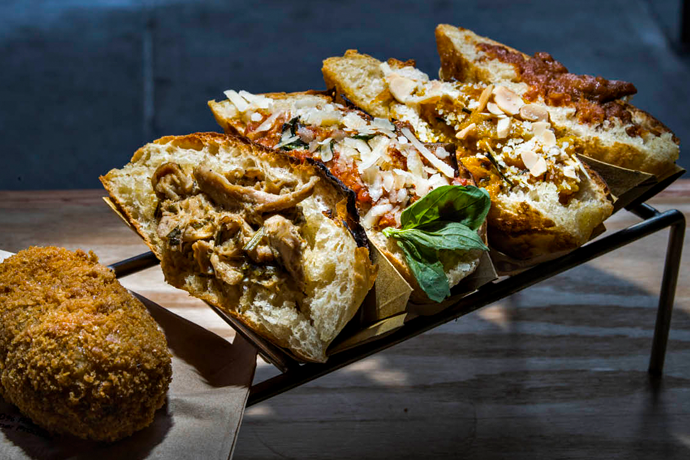 6 Photos Trapizzino
Today, on this fourth Monday in February, we bring you a true innovation in the world of snacks: an Italian spot combining two iconic lunch items, a casual place you’ll find yourself popping into when you can’t decide if you want a pizza or a sandwich or a plate of eggplant parmigiana.

It’s called Trapizzino. First and foremost, it is a stuffed pizza pocket created by a legendary Roman pizzaiolo. It’s also the name of the spot where you’ll now acquire such delightful sustenance, now open on the LES.

There are seven of these spots in Rome—but this is the first one opening stateside.
And Mario Batali took Action Bronson to one in an episode of Vice’s F*ck, That’s Delicious, so you know it’s (probably) good.

Not all yeast is created equal. This one, for example, is particularly magnificent.
It’s been handed down through 11 generations of Puglia bakers, and it manifests itself in the most perfect crunchy-soft dough imaginable.

The idea was to make classic, slow-cooked dishes inexpensive and portable.
So they took things like eggplant parmigiana, white-wine-soaked chicken with garlic and rosemary, and beef shoulder with tomato and berbere spices, and stuffed them into pizza dough pockets. Oh, and the recipes were mostly taken from conversations with local grandmothers back in Italy.

The menu will change often, but you’ll generally have eight different trapizzinos to choose from.
Along with a few suppli (which, for the unfamiliar, are rice balls with fillings like guanciale or butternut squash with provolone).

Take a moment to look at it right now.
Then do yourself a favor and get over there as fast as possible. They’re pizza-sandwiches, after all.