Before and After Barclays Center, You Head Here 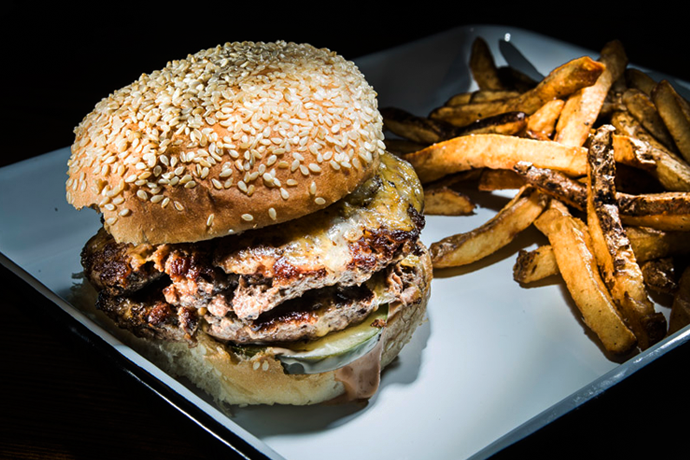 So we figure by this weekend you’ll be ready for the complete opposite of that. Like, say, wings and arcade games after Barclays Center. So that’s exactly the kind of place we’ve got for you today: it’s called Atlantic Social, it’s enormous, and it’s opening Sunday.

From the moment you enter, you’ll have to make some decisions.
That’s because they’ve got three distinct areas for you to work with: the bar, the restaurant and the lounge, which has a sort of basement-man-cave vibe. So depending on who you’re with and what you want, things could go any number of ways.

Should you want a tiki-inspired Bondi Kelly at the bar...
Head to your left, and claim a couple stools under the Brooklyn sign hanging above the long wooden bar. They’ve got a solid selection of drafts, wine and drinks similar to and including whiskey-ginger smashes.

If you’re feeling more like sitting down with some platters of lime-crema-topped beef nachos...
Head right, to the communal table under those low-hanging bulbs, and let the double-decker burgers, General Tso’s soaked chicken wings and ham-pineapple-jalapeño pizzas roll.

You’ll note there’s another room to your right. Inside: shuffleboard, a fireplace and old arcade games.
Also inside: flat-screen TVs, two cozy couches and pretty much anything else you’d want late-night-entertainment-wise. By which we mean Big Buck Hunter and shuffleboard.

And here’s where you get a feel for the place.
Isn’t photography grand?