Rick Bayless Is Teaching You to Cook Tamales and Tacos

The Chef’s Got a New Online Cooking Class. We Took That Class. Dough Got Everywhere. 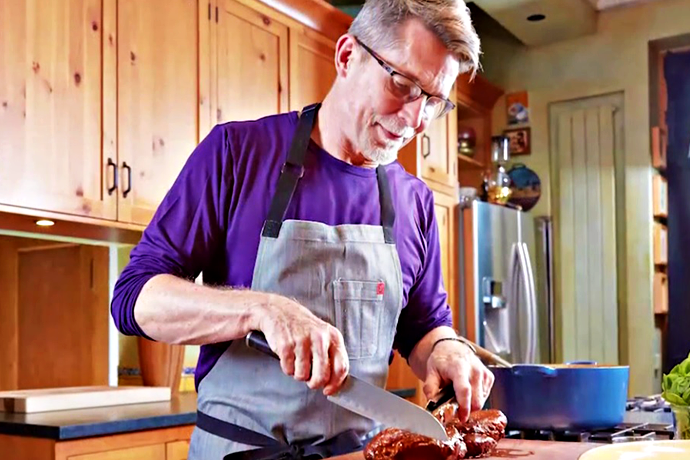 Chef Rick Bayless has a roster of popular Mexican restaurants in Chicago, a White House State Dinner under his belt and a Top Chef Masters victory to his name. Plus, he’s responsible for Frontera salsas, which are probably your best jarred-salsa bets in the grocery store. So if you’re going to learn to cook Mexican food, he’s the guy you want doing the teaching. And that’s exactly what’s happening here, with Essentials of Mexican Cooking, the Bayless-led course that’s now available online via Craftsy.

I’m a huge fan of Mexican food. Eat it all the time. Cook it sometimes (but usually resort to my favorite Mexican delivery spot). So learning a few tips from Bayless seemed like the perfect way to hone my skills and save a little cash.

The five-pack of classes includes “Tortillas & Salsas,” “Taco Fillings,” “Guacamole & Ceviches,” “Tamales Two Ways” and “Classic Red Mole.” Determined to make my way through the entire course load, I spent a weekend holed up in my tiny Brooklyn apartment kitchen, armed with vim, vigor and every type of hot chili pepper they had at the corner market. Also: tequila. Here’s what I learned. 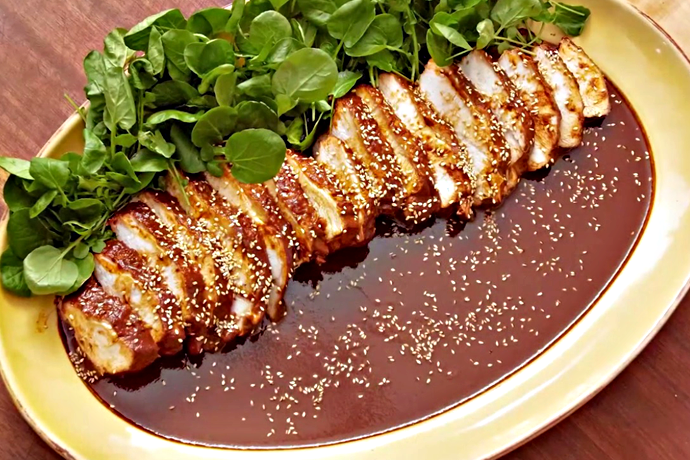 You can choose your own adventure.
The classes offer a range of options for home cooks, depending on how in-depth you want to go. For something simple, stick to salsas and guacamoles. For something more advanced, dive straight into the tamale and mole recipes. I decided to start with the easy stuff and work my way up.

Bayless really nails that nerdy-dad vibe...
When hosting a cooking show, there’s a fine line between enthusiasm and mania, one that TV chefs seldom tread deftly (looking at you, Guy Fieri). Chef Bayless manages to stay on the right side of that line—he’s cheerful and encouraging, and he clearly loves the cuisine he’s teaching. The dad humor is strong with this one; at one point, he refers to Americans as “a nation of chippers and dippers” without even a hint of sarcasm.

But he also nails that expert-chef vibe.
In spite of the man’s avuncular warmth and sometimes painful jokes, there’s an intensity simmering behind Uncle Rick’s glasses and formidable mustache. He is goddamn committed to excellence in his cooking, and he won’t settle for anything less. The effect is a little unnerving, kind of like a pre-Heisenberg Walter White. But more than anything else, it encouraged me to stay focused and do my best to follow the recipes because, hey, I’m not about to let down Walter—I mean, Mr. Bayless. 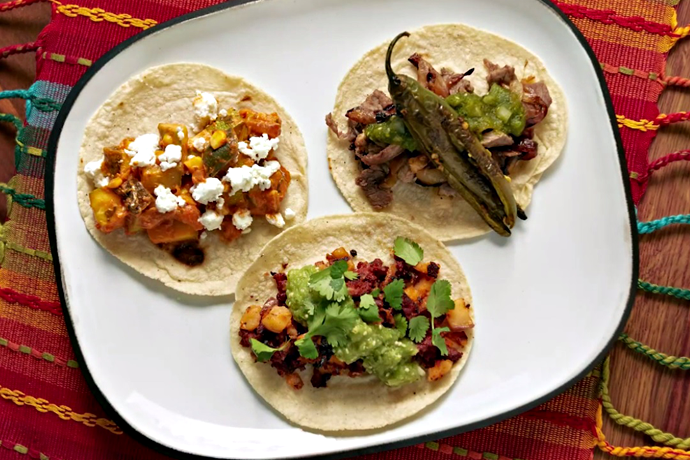 His kitchen is better stocked than yours.
Take a peek inside your kitchen cabinets. Got a tortilla press in there? How about a heavy molcajete? If not, you might feel disadvantaged when Bayless breaks them out, because he assumes that you’re working with the same tools he is.

So you’ll just have to get creative.
Don’t let your lack of traditional Mexican cooking equipment deter you. Instead, just engage in a little creative problem solving. A couple pieces of waxed paper and a wine bottle can press a tortilla plenty flat, and placing your salsa ingredients into a ziplock bag and crushing them with a cast-iron skillet is... not quite a mortar and pestle, but it’ll do in a pinch.

Bayless likes spice. You should, too.
During the tomatillo salsa tutorial, Bayless rough-chops a few serrano peppers and tosses them into his food processor, seeds and veins and all. “You’ll be surprised to see me using all the seeds and the veins, the part that has all the heat. But I’m actually looking for heat,” he explains with a wry smile. The implications are clear: give in to the power of the hot peppers or enroll in another, lesser cooking class. To be fair, he later provides a quick tip for reducing the heat level of your chilies. But it’s a throwaway gesture, and we all know it. Spiciness is a cornerstone of these dishes. 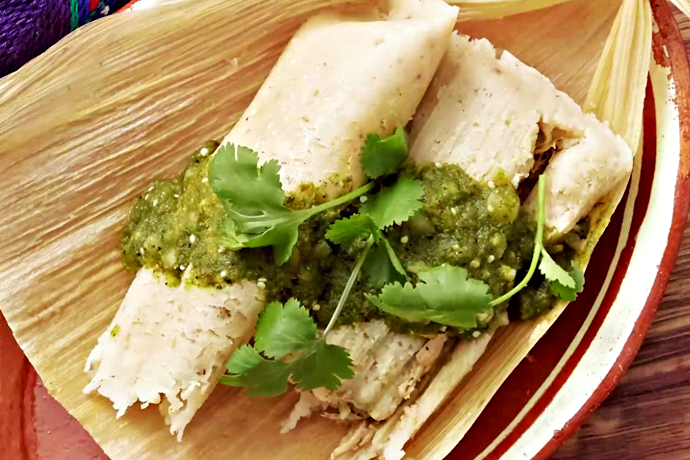 Tamale making isn’t easy.
Sure, Bayless makes the process look so simple. But if you’re a novice like me, nothing could be further from the truth. Just know this: 1) You will get masa dough all over your kitchen. 2) You will find masa dough wedged under your nails in ways that seem quite impossible. 3) You may even discover bits of masa dough in your hair days after you finish cooking the tamales, despite your fondness for showering. 4) You will rip at least a dozen banana leaves into unusable shreds before getting a single panel that’s the right size and shape. 5) You will inevitably overload the steamer you borrowed from your neighbor and begin to panic when it starts making weird noises. Point is, making tamales is stressful.

But it’s well worth the effort.
You may be tempted to admit defeat, and there’s no shame in being bested by a tamale. But if you can see it through until the end, when you finally unwrap your cooked banana leaf parcels and taste a forkful of slightly sweet masa cake filled with spiced pork or tangy green chili chicken... it will all be worth it. Because those things were fucking delicious.

All of it was. The salsa, the tacos, the mole... That Bayless guy is legit, as no one needs me to tell them. And his classes are a great way to spend a quiet weekend stockpiling food for winter. And if said weekend needs a little boost, the class pack includes a bonus episode on how to make the perfect margarita.