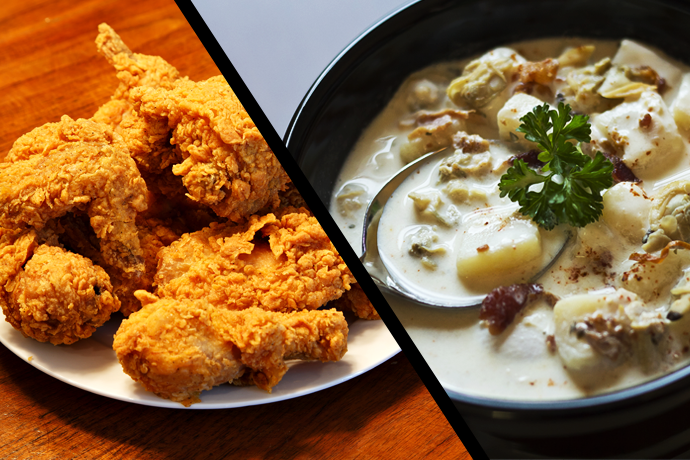 That’s all that’s left before we learn whether the Falcons or the Patriots come out on top in Super Bowl LI.

So today, we’ll attempt to resolve another lingering question: which regional cuisine reigns supreme, that of Atlanta or New England?

Eric Twardzik (ET): All right, before we dispense any pleasantries, let me just say that New England food is majestic, and too often misunderstood. No, clam chowder is not a soup. Adding celery to a lobster roll should be a criminal misdemeanor. And beans aren’t at all a thing in Boston, so please stop using the phrase “Beantown.”

Kelly Larson (KL): I had no plans to dole out pleasantries. This is serious business. And while I’ve been known to enjoy a lobster roll or bowl of clam chowder before my infuriating late-life shellfish allergy kicked in, I can’t agree with all of these caveats you’re imposing on them. In fact, damn your caveats. Damn them, sir.

To me, that’s the beauty of southern cooking. For one, it doesn’t require the sprinkling of angry-dust all over everything to qualify as majestic. Southern food doesn’t care what it is or how it’s enjoyed, it just wants to make people happy.

ET: Perhaps it’s an effect of all the free-floating Puritan molecules in the atmosphere, but when it comes to New England’s greatest foods, I’m orthodox. I’m not going to undertake a citizen’s arrest if I see someone putting lobster salad inside a croissant, but it’s just not necessary.

KL: Don’t you want to be happy, Eric? Don’t you want to sit in front of a steaming bowl of cheese grits or a chili dog at The Varsity without fear of your fellow man judging you on your choice of accoutrements? I think you do.

ET: Simplicity is the strength here. And yes, many Southern staples are humble, but you’re still breading things and frying things and (insert other offensive Yankee misconception of Southern cooking here). Some of New England’s best pleasures are barely prepared. For crab rolls and lobster rolls, you just throw a sea monster in a pot and put the meat on a roll with some mayo. Heck, a lobster bake is half that work. And oysters—which are plentiful and awesome around these parts—just require a knife and a pair of gloves.

KL: Okay, so maybe I was a bit hard on you back there. You make some valid points. You also said “sea monster,” and for that I thank you.

ET: New England food is hearty. Often, the classics come down to fat plus whatever leftovers we have lying around so we don’t die during winter. That formula creates some thoroughly delicious cuisine that never fails to be a great beer sponge, either.

KL: I don’t know, though. Let’s pretend for a minute that I’m from, say, California. Someone places a bowl of clam chowder and a basket of fried chicken in front of me. I’m not half-stepping. I’m swan diving into that fried chicken every time.

It doesn’t matter if it’s my Savannah-born-and-raised mom’s recipe or the one from that God-blessed Atlanta institution, Mary Mac’s... fried chicken is the great comfort food equalizer.

ET: Whoa. That is a serious escalation. I love fried chicken. Heck, I ate fried chicken three times in the last week. And before you ask, I’ll come out and say that I did not eat clam chowder once in that time period.

But this does not discredit my argument. Fried chicken is the sort of thing I could eat once a week. Chowder isn’t. Chowder is a rare bird that requires whole sticks of butter, vats of heavy cream, and shellfish. It’s rich, complex and multi-layered. I will never turn down a hot, juicy bite of fried bird. But a fried bird is still a fried bird: chowder, just like Whitman, contains multitudes.

But have you ever had Chinese clam chowder? I don’t think so. It’s distinctly New England, and something we can rightly claim as our own. Unlike your promiscuous fried chicken, which isn’t so much an Atlanta food as an obvious way to prepare a bird, and one you’ll find the world over.

KL: I don’t feel like we got much accomplished here, except maybe some elevated blood pressure. Although that could just be the fried chicken talking.

KL: At least that’s something we’ve got in common. Our fare cities’ iconic foods are trying to kill us.