The Taco-Making Heroes of Mexico City 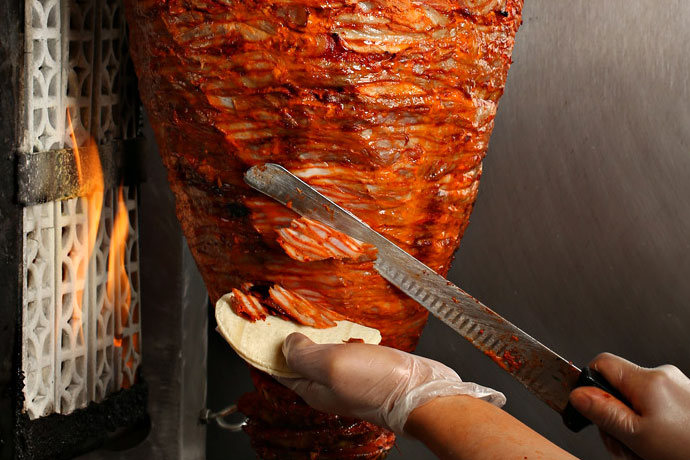 All around Mexico City, you’ll find these stoic old men, standing guard in front of their respective taquerias’ al pastor spits, tools in hand, ready to deliver you some delicious pork.

From my experience, they are mostly between the ages of 55 and 75, with skin weathered from the sun. They are unsmiling, not because they are unfriendly, but because theirs is a serious business requiring the concentration of an ascetic. I learned much (and did some reading, too) during my month in Mexico City, and it turns out that taqueros like these usually begin as apprentices, performing the necessary grunt work before learning how to handle the meat, concoct salsas and generally make great tacos themselves. Al pastor specialists are particularly dedicated, arriving early to prepare the marinades and stack the pork on the spit—a vertical rotisserie called a “trompo”—and staying late to serve the hungry masses.

These men belong to that forgotten class of artisans who learn one trade as kids and perform the shit out of it their entire lives. One wonders whether they’ll eventually be phased out of the economy, going the way of blacksmiths and clockmakers. I, for one, am optimistic about their chances. Nothing is sacred, but al pastor, in Mexico City at least, comes pretty damn close.

A little background: the al pastor taco is a direct descendant of a type of Arab taco, brought over and popularized by the Lebanese in the wake of World War I. The Lebanese used pita and lamb on a spit (think: shawarma), which the Mexicans eventually swapped out for tortillas and pork. A traditional al pastor is marinated with a combination of achiote, dry chilies and citrus, before being loaded onto that trompo. It should be topped with cilantro, onion and pineapple. Tacopedia suggests that El Tizoncito was the first place to add pineapple, in 1966. And by some twist of taco-related fate, I found myself living right next door to that most historic taqueria last month.

It was the site of my first meal, when, after a 24-hour travel day and a quick catnap, I emerged squinty-eyed from my apartment onto a tree-lined street in an unknown city, certain only that I wanted to put some tacos in my mouth, and soon. I was drawn toward its burnt-orange-colored pork, visible to all passersby and perspiring un-self-consciously on its spit in the midday sun. That first day, I didn’t even look at a menu. I just pointed to the meat and asked the old gentleman nearby for “tres,” and a Modelo.

Over the course of the next month, I ate there countless times, mostly by myself—for workweek lunches, for late dinners, at around 2am after a night of drinking—and never dared order anything else. Always, I sat at a high-top table facing the street, people-watching stylish pedestrians from the nouveau hip neighborhood of La Condesa. And always, I watched the same old gentleman occupying the spit, learning to appreciate the quiet, confident control of his knife—the way he cut decisively into the conic hunk of meat, slicing thin pieces onto the small tortilla splayed out in the palm of his hand. After a visit or two, I became especially enamored by the almost imperceptible flick of the wrist he used to lop off chunks of pineapple from the top of the trompo, and how they would fall ever so gently onto the taco below.

These spits require constant attention, so the best ones will usually be manned at all times. (The single exception to this rule may be street tacos. Because while some of these vendors don’t even use a traditional trompo, nothing on this mortal earth quite tops strolling home from a bar at 2am, stopping for a few al pastor street tacos and then smoking a loosey you purchased for 10 pesos from the same guy who made your food. It’s the cycle of... something.) The ideal al pastor, in my humble opinion, should be both crispy and impossibly tender, with hints of garlic and a zesty kick. I prefer the smaller, snack-size tortillas to the larger, American-size ones, which can end up detracting from the flavor; for similar reasons, I’d also resist the urge to get your tacos with cheese (this is informally known as a “gringa”). And if your server doesn’t present you with at least three different kinds of salsa, you should kindly get up, pay and silently vow never to return.

Some go-to places for al pastor in Mexico City, either from my personal experiences or those of friends and locals, include Los Espléndidos, which had my favorite habanero salsa; Salón Corona, founded in 1928; El Huequito (yes, Anthony Bourdain went there, and for good reason); and a cart called Ricos Tacos on Calle Liverpool 91 in Colonia Juárez, where, according to lore, the guy makes 1,000 tacos per day, eats 30 and is only 21 years old, thereby representing the future of al pastor, and perhaps the entire human race.

But if you were only to have one al pastor taco experience in Mexico City (which would be sad), I’d suggest you do as I did and head to El Tizoncito, around 9pm on a weekday, a slight breeze breaking up the thick night air. I’d tell you to order three al pastor tacos and a cerveza from my favorite al pastor specialist. I’d tell you to eat them slowly, pacifying the spice with chips and bean dip. I’d tell you to get up, wipe your hands with the impossibly small napkin and prepare to go about your evening.

Then I’d tell you to sit back down, and order one more.