Cannabis-Spiked Hot Buttered Rum to Save the Holidays

Talking THC and Holiday Cookies with a Top-Notch Weed Baker 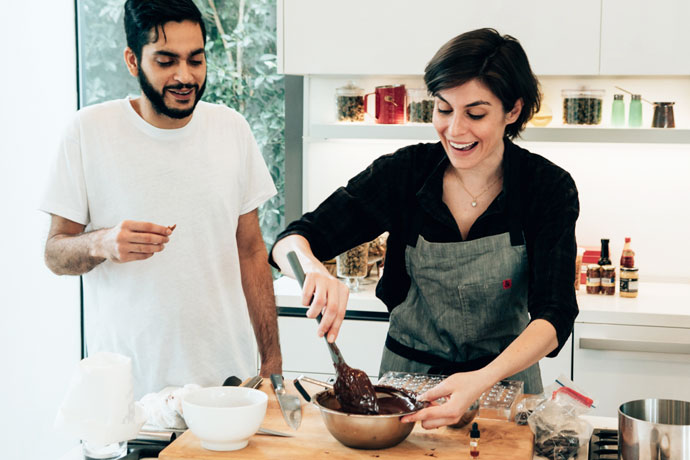 When I was 16, I woke up in a tent at a music festival, accidentally ate a pot-laden Rice Krispies Treat for breakfast and proceeded to have the most underwhelming experience of my then-life. In fact, I’m pretty sure I fell asleep within a few minutes and woke up in a sort of cloudy stupor, before wandering out into the desert heat in search of an icy lemonade. Since then, I’ve generally avoided edibles.

But now, with the holidays all around us, I figure it might be time to give the world of edible weed another go. Because a professional baker is doing magical things with pot, I prodded her for a holiday-appropriate cannabis recipe, and goddamn if that doesn’t sound perfectly festive and necessary right now.

See, I attended a recent viewing party for Viceland’s Bong Appétit, a show wherein the hosts and some well-known chefs conspire to throw cannabis-centric dinner parties. The evening involved freely passed-around joints and some undosed (to everyone’s disappointment) sliders, plus the screening of a new episode called “Molecular Marijuana,” in which a pot enthusiast, a pot connoisseur and a pot baker team up with the chef from LA’s acclaimed restaurant Wolf to throw a special sort of dinner party. THC-smoked raw tuna, ganja gremoulade, weed-laced wine... that sort of thing. Turns out, the world of cannabis food has come a long, long way from space cakes and overdosed marshmallow sweets.

I then spoke with Vanessa Lavorato, an accomplished baker and confectionist with her own cannabis chocolate company, Marigold Sweets. We talked proper dosage, how far weed cuisine has come and where to start when cooking for yourself. She even provided a couple easy-to-follow holiday recipes, so we can all give this a shot ourselves sometime.

Weed can taste amazing, or it can taste like nothing at all.
“It can be delicious, if it’s done in the right way. At the other end of the spectrum, it can completely overpower your palate. So with the show, we definitely used it as a flavor for the dishes. For the ‘Molecular Marijuana’ episode, we used cannabis to make a gremoulade to sprinkle on beef cheek. In that sense, it works really well. But in the edibles industry, we’re always trying to minimize the flavor. If you eat one of my chocolates, there’s no cannabis flavor, but you still have the high from the THC. That’s from using a concentrate. They take away all the plant matter, the terpenes, and leave you with an almost 100% concentrate of THC, CBD and other cannabinoids.”

With the good stuff, you don’t need to worry about getting too high.
“Edibles now are pretty on-point. I use a CO2 concentrate, and I know exactly how many milligrams are in every chocolate. Of course, there’ll always be a slight variation, but we have them lab tested—that’s one of the new requirements from the state, everyone in the industry is lab testing their medicine and making sure it’s consistent.”

It’s easier than you think.
“For a total beginner, I think it’s easiest for them to get their hands on flowers or buds. They probably won’t have access to a concentrate, which is really how you can control your dose. For something like a dozen cookies, if you used half a gram of cannabis flower, you’d have a really light, nice dose. I’ll teach people how to activate the THC from flowers and make a really basic cannabis butter, and you can up it by adding more or make it lighter by taking out some of the flower.” (We’ve got her cannabis butter recipe below. You’re welcome.)

No one cares if you’re using sativa or indica.
“Here’s the thing about edibles. Because we metabolize them through our liver, the different strains or varieties don’t express themselves the same way as when we smoke them, because our bodies convert the THC. So when someone says they’re using a sativa or an indica, it’s somewhat deceiving. How I try to explain it is that edibles always feel like indica. They’re going to be a little bit heavier. There’s going to be a time-release. It won’t hit you instantly—with an edible, it’ll usually take an hour or two to set in.

“But in regards to variety, it doesn’t really matter. The terpenes are the flavor notes from different cannabis varieties—kind of like an almond or a vanilla extract—and, well, they’re really sensitive. When we eat them, they get destroyed by our liver enzymes, so we don’t get the different effects of the cannabis varieties. So whatever you have, whatever smells good to you, you can use.”

Less is more.
“The first edible that I made was on 4/20. I went to a party in Santa Cruz. Someone had brought cannabis butter, and I was really into making pie at the time, so I made a cannabis-apple pie with it. It was my first lesson in ‘less is more’ when it comes to cannabis food. It was delicious to a fault.”

And on that note, the time for pot-infused cocktails is upon us.
“It’s important to really err on the side of less is more with cocktails because you’re combining two different effects on the body. And so, we were really careful with that. Sometimes the drinks wouldn’t have any psychoactivity, the pot would just be for flavor—like putting the terpenes into a martini, stuff like that. We definitely experiment with cocktails, and the hot buttered rum will be a nice way for you to do so, too.”

Right. Here’s where you try this at home.

Start with the butter, and from there, turn it into a cannabis hot buttered rum, or follow Vanessa’s grandma’s recipe* for angel thumbprint cookies. 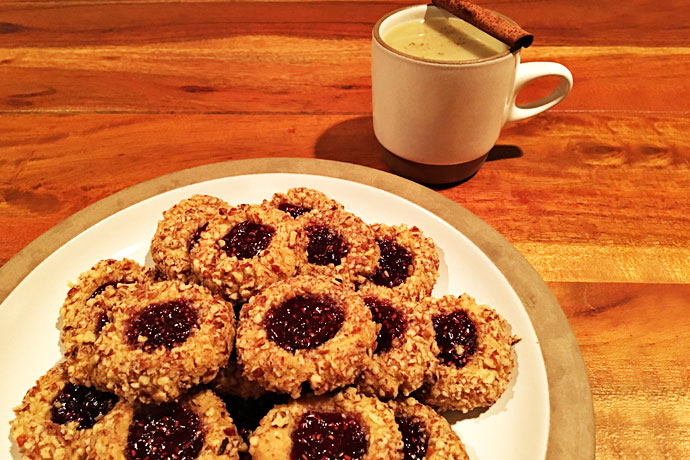 Boil water and add cinnamon sticks, cloves, allspice, orange peel and dark brown sugar. Steep for five minutes. In each mug, add three tablespoons of rum and half a tablespoon of cannabis butter. Pour the hot tea over the butter and rum; stir to blend.

Preheat the oven to 325 degrees F (160 degrees C). Cream the cannabis butter, brown sugar, egg yolks, vanilla and almond extract. Add the flour and salt; mix until just combined. Make small balls of cookie dough, coat in the egg whites and roll in the ground nuts. Place on a lined cookie sheet and use your thumb or the handle of a wooden spoon to imprint the center of the cookies. Fill the imprint with jam and place on the center rack of your oven. Bake for 20 to 25 minutes.