A Helicopter Ride to the World’s Eight Highest Peaks

10 Days of Aerial Gallivanting Through the Himalayas 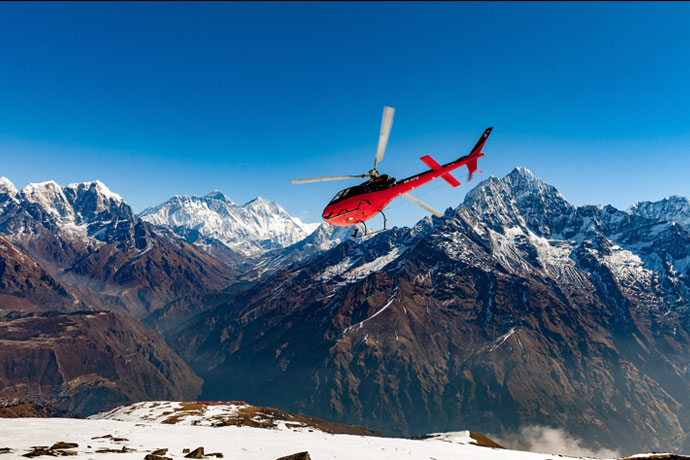 4 Photos Himalayas by Helicopter
It used to be that to get to Everest’s base camp, you needed to vigorously strengthen and condition your body for months before even making an attempt.

But now we have helicopters, so...

You can see a lot more than Everest with Himalayas by Helicopter, a 10-day journey on which you’ll puddle jump by ’copter to the eight highest peaks, and just for good measure, also ride an elephant, now booking.

As you probably expected, this expedition starts in Nepal’s capital, Kathmandu. You’ll get there. You’ll meet your Sherpa. You’ll go to bed. And the next day you’ll ship off to the third-highest mountain, Kanchenjunga.

Then, over the next eight days, you’ll spend a lot of time in the air and visiting the aforementioned mountains and other sites, so we condensed the highlights for your convenience...

—Spend almost every night in a different lodge or resort not far from the mountains you just... well, “conquered” isn’t the right word. Patronized?

—Definitely take a photo on Everest because obviously. Spoiler alert: it looks a lot like this.

—Bathe in the otherworldly panorama of four of the world’s tallest peaks. Feel small in your place in the universe.

Because there’s not enough time to get existential.