It’s Called the Saratoga, and It’s from the Spruce Team 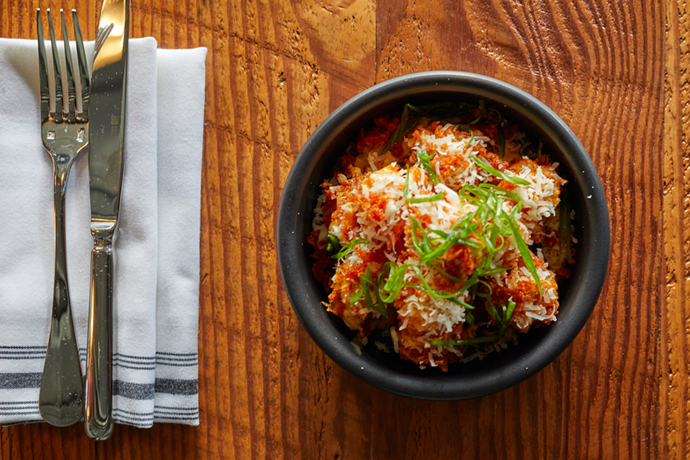 Requires a DeLorean and too much Huey Lewis.

Another approach: frequenting a 1908 hotel that’s been partially transformed into a beautiful, two-story cocktail bar.

Now seems like a fine time to introduce you to the Saratoga, a new drinking establishment and supper club that’s opening Tuesday from the team that brought you Spruce. Have a look around.

Yes, the Saratoga was a hotel built way back in the day. But its beautiful bones remain, from the exposed steel beams stamped “Carnegie” to the immaculately restored marquee out front.

Upon entering, you’re transported to a glamorous supper club of old, when the Tenderloin was the hub of San Francisco’s jazz scene. A vibe that’s evident in the upstairs lounge, formerly the hotel’s lobby. Head to the Douglas-fir-and-iron bar up there and start with a round of barrel-aged drinks.

Eventually you’ll end up downstairs and, after passing the seven-layer iron-and-crystal chandelier, find yourself in a smaller, more intimate space. All soft banquettes and vintage paintings from the Lost Art Salon.

So you’ll get comfortable, tuck into some well-conceived throwbacks like steak au poivre and chicken paillard, and dive into their lost and forgotten spirits program featuring over 700 bottles.

Maybe start by dipping a toe in.