The Chef Talks Red Rooster, Harlem and a Hypothetical Dinner for Presidents 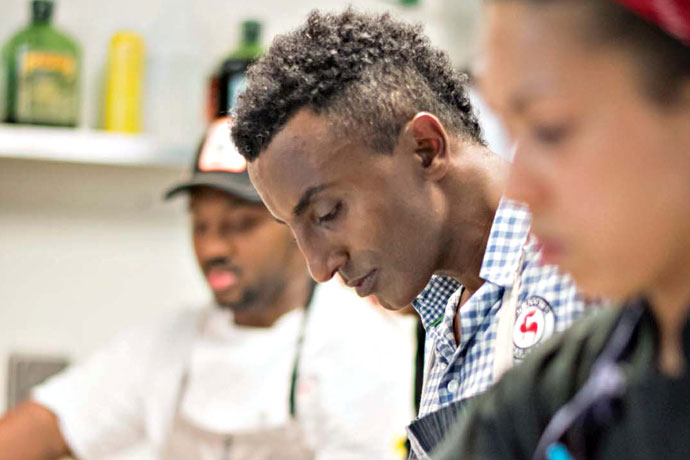 19 Photos <em>The Red Rooster Cookbook: The Story of Food and Hustle in Harlem</em>
Marcus Samuelsson was born in Ethiopia, was raised in Sweden and lives in Harlem. He’s got restaurants in New York, Chicago, Sweden, Norway and Bermuda. He has cooked for the Obamas and is friends with John Legend. And his personal story is one of the more interesting stories you’ll find, among chefs, or anyone.

But he’s already told that tale, so his new work, The Red Rooster Cookbook: The Story of Food and Hustle in Harlem, is a focused look at the food, people and history making up the neighborhood that he calls home.

It’s a good read. Especially if you like compelling characters, humorous anecdotes, music and fried-chicken recipes you’ll want to snatch right off the page (you can ogle those here).

So we got Chef Samuelsson on the phone to ask him a few questions about his new book, Harlem and, obviously, what he’d cook for each presidential candidate.

After coming to New York, what first drew you to Harlem?
I was always enamored and inspired by the community and had some friends there. So whether I went for music or other events, I often found myself there among these beautiful brownstones and all the culture. I wanted to be part of the community. Before that I lived in Midtown, which was great, but no one knows their neighbors.

In your book you talk about the eclectic style of the Red Rooster. How do you describe the food?
There are notes of the Harlem community mixed with undertones of my own background. So the fried yardbird and shrimp and grits have Swedish and African influences. You have my grandma’s meatballs on the menu, and see Ethiopian spices like berbere. And we’ve got some influences from the barrios of Spanish and Mexican Harlem, too.

Music plays a large role in the book, both its history as it relates to Harlem, and also the playlists in your restaurant. What’s your relationship to music?
Music is an art. It’s the narrative of Harlem. We have musicians from the neighborhood playing every day or night, and it informs the setting and what we cook that day. The art and culture is not just there to be pretty. It informs the food.

You’ve had restaurants in Minnesota, Chicago, Sweden, Norway and Bermuda, and worked in kitchens in France. How do you find cooking for other parts of the country and world compares to cooking for New Yorkers?
In Harlem, Red Rooster works so well because it’s part of the community. It’s one experience, even though we have three different guests: locals who walk in, New Yorkers who make reservations and travelers who read about us and make plans to visit.

Sweden is a very different place, but people come for the same reasons. You could be there because you live nearby, or because you’re a foodie and visiting for the very first time. Across all the restaurants, we try to maintain a local conversation that we drive through local talent and food.

What’s your favorite city for eating?
There are so many places, but I love Singapore. There you can have Indian for breakfast, hawker stall Chinese food for lunch... the street food there is so amazing. But I also love what’s happening in America right now. Even much smaller cities than New York, San Francisco and Chicago. I didn’t expect that. But you see such a level of pride in chefs, and now you can have amazing food anywhere. The local cooking scenes have become much more important across the country. For example, there’s so much happening in Oakland right now that it rivals San Francisco. And Nashville and Austin are doing good things. It’s not just the chefs but the community at large with all the farmers’ markets and food activists. Customers are better for it because they get a better experience.

How would you describe the food scene in Harlem? Has it changed a lot since you opened your restaurant in 2010?
The food scene is very diverse. Italian, Puerto Rican and Mexican food, Jamaican, Chinese and African-American, of course. Japanese food is really strong right now, too. The big thing is this idea of aspiration and inspiration. Young cooks used to leave Harlem to get inspired, but now they don’t have to. There’s a movement now that, if you love food, stay uptown. If you’re a local entrepreneur, you can make it happen here. It’s important that every borough and neighborhood has good food.

Your book suggests there’s an almost mythical, spiritual aspect to making fried chicken. Why does that feeling persist with fried chicken specifically?
It’s a very relatable dish, yet people have their own secret recipes. You can cook the whole animal—everything from the wing, thigh, breast—and it’s a protein that almost anyone can eat regardless of religion or culture. It’s affordable, so it’s democratic. Koreans have their version. Americans have their version. Everyone has a version. The chicken is a very diverse bird.

Let’s say I’m frying chicken at home. What are the most important tips to getting it right?
Use a large pot, and fill it one-third to halfway full with oil so it doesn’t boil over. That hot oil is intimidating. Second, once you drop in the chicken, reduce the temperature to 320. Keep the oil at 320 to cook it through. Lift out the bird, let it rest and drop it back in for a second fry so it gets crispy. I think thigh meat, bone-in, with the skin on assures you of having the most juicy bird.

What should we drink with our perfectly fried chicken?
I love beer. It works really well. But if it’s a big dinner party, I would go with a lighter wine like a pinot noir. If I’m eating late at night, I would drink bourbon. It’s less about the chicken and more about the time of day and who you’re with.

You cooked braised short ribs when President Obama stopped by. What would you prepare for a future President Clinton or Trump?
Well, for Trump, I wouldn’t cook him anything, because he’d probably try to kick me out of the country. I’m sure I wouldn’t be his first choice for a state dinner. Hillary is on the road a lot, working hard and hustling. Catfish would be perfect. It’s flavorful and gives you energy to keep going.

Can John Legend cook?
John can throw down, absolutely. But he is a better singer and songwriter than he is a cook. Which is good. He’s got to leave something for the rest of us.