A Portuguese Sandwich to Wake the Dead

One Man’s Brush with the Epic, Hangover-Curing Francesinha 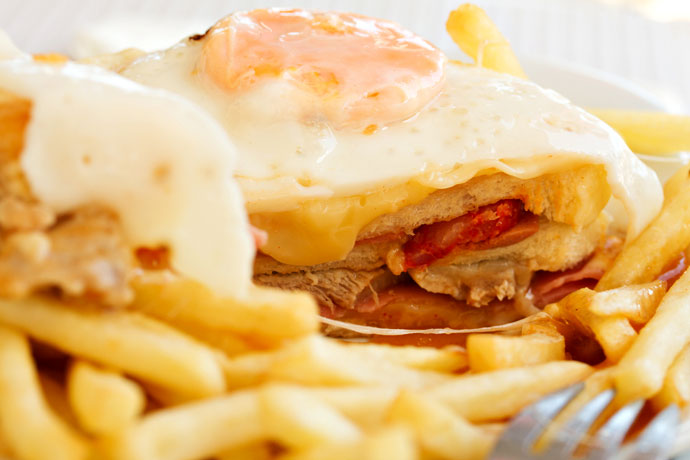 The sunlight fought through the wavy wall of plastic surrounding my bedroom in the boutique guesthouse where I was staying for the weekend. I had to check out soon, I knew, to face the day and all its day-like splendor—a verdant city park, some pleasant vistas, a gusty stretch of coastline—before heading back to Lisbon. But I could hardly move, and my eyes sagged from an unquantifiable weight. I was terribly, terrifically hungover.

The night before, a friend and I had taken to the streets of Porto, and I had overdone it. There was the one bar with the totemic knickknacks of ’50s/’60s Americana, and the other one shrouded in smoke where we were surely unwelcome, and the last one, after 5am, that had bloodred walls and too many mirrors but, magically, played several songs off the Strokes’ Is This It.

It was a good time, but the sort of good time you know you’ll have to pay for later. And karma had come to collect. Because my mom was visiting, and my presence was required for lunch.

Thankfully, I knew just what to do.

The Francesinha is a famous Portuguese sandwich, though it’s particularly ubiquitous in Porto. Judging from the murmurings of my fellow travelers, it seems to evoke a wide-eyed appraisal for its degree of overindulgence. And when I had arrived at the guesthouse, the proprietor assumed I’d want to try it (I guess I’ve got that sandwich-crazed look about me), and so suggested one of his favorite spots, Capa Negra II.

My mother, sympathetic to my condition, met me at the restaurant, where I found more locals than I’d seen in my entire two days in Porto. The bustling, greasy cafeteria had the feel of a Denny’s, and the waiters were mostly old pros with bushy mustaches—quick to draw a menu; efficient; no-bullshit. There were several Francesinhas on the menu. Some came with an egg, others with fries. Others still were described as “classic” or “traditional,” though with scant indication as to what those modifiers meant. I asked our waiter which he preferred; he pointed to the one that came with both fries and an egg, which seems prudent. I said okay and promptly requested two ginger ales.

What came next was unlike anything I’d ever witnessed on a plate: a square mass of cheese-covered bread, topped with an over-medium egg and encircled by a mess of fries drenched in tomato-beer gravy. Cutting into the thing (it was definitely a fork-and-knife kind of sandwich), I was enamored by its cohesiveness—the way the egg stuck to the cheese, which stuck to the bread, which stuck to the meat. It was a monster, but a wonderfully constructed monster. I lauded its architecture. My mom, meanwhile, looked on with a mixture of disgust, fascination and, I like to think, pride.

It took a few bites before I realized the extent of what I was eating: a hearty layer of ham below a heartier layer of Portuguese pork sausage below a downright gratuitous layer of thin-cut steak, all with an attitude toward vegetables that can best be described as the ambivalent sandwiching equivalent of “Eh, fuck it.”

Some sandwiches, even fork-and-knife jobs, slip and fall apart due to an uneven bread-to-meat ratio. But not the Francesinha. Every bite contained every layer of meat and bread and cheese and egg, with the liquid-y gravy lubricating the whole mishmash and the fries offering a starchy reprieve. Say what you want about Portugal—like just this once, please shut the damn city down before 6am; I’m starting to lose my shit—but they sure know how to build a sandwich.

And while I wouldn’t recommend eating it every day (or even annually), by the time I’d cleaned my plate and finished my ginger ales, I emerged approximately 42% less hungover than before. Indeed, I was a new man, ready to face the demands of the fast-approaching afternoon.

That is, after some Tums. And a good nap.

Food & Drink
This Is THE Book on Pizza
"Modernist Pizza" Is 1,708 Hunger-Inducing Pages of Recipes, Photos and Stories

Food & Drink
Meet Superfrico, the "Italian-American Psychedelic" Restaurant Coming to Las Vegas
It's From the Spiegelworld Guys, and It's Here to Blow Your Mind

Food & Drink
Momofuku Just Launched a Lineup of Dried Noodles
It's Like David Chang Is Cooking Inside Your Home. Kind Of.

Food & Drink
Have a Cocktail. Then Email One to a Friend.
One Part Co. Offers DIY Infusion Kits for Making Good Drinks at Home