An Italian Beef Spot Has Arrived at Long Last

A Little Slice of Chicago in Tribeca 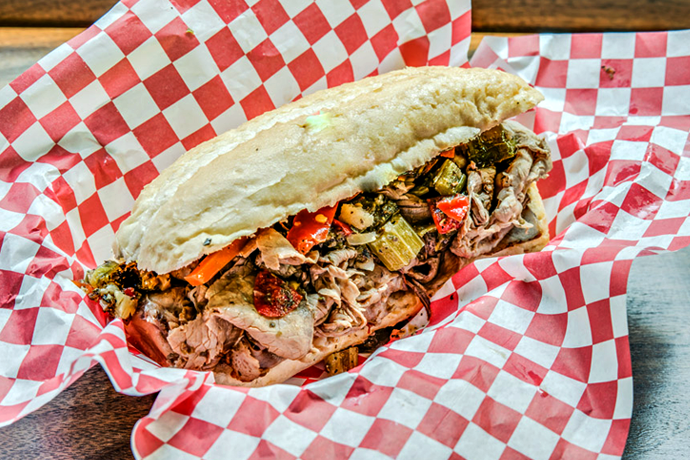 Because in rolls Hank’s Juicy Beef, the Italian-beef-sandwich-dedicated spot we’ve waited too long for, now open in Tribeca.

Hank’s not totally new to the game. He’s had a stand at the Long Island City Flea for a while, which brings up an important point. Italian beef has never been able to stand still in New York. Ever elusive. A stand at Smorgasburg here. A menu special there. It’s the chupacabra of sandwiches. Now, it’s got a real-life home dedicated to it, with a door and walls and everything, and this is it.

For the uninitiated, Italian beef is a product of Chicago. The process goes as such: spice and slow-roast some beef, slice it thin enough to pile a lot into an imported-from-Chicago flaky French roll, dip it in au jus, pile it into that roll, top it with sweet peppers or giardiniera (a spicy pepper blend)—and provolone, if you want. Then, either eat (the dry version) or dip the entire thing back into the au jus and eat (the wet one).

For the most part, you’ll be taking this out and eating it elsewhere, eyes rolling to the back of your head in pleasure during the first bite. But if you happen to pull up a chair, know that you can also have one of Hank’s very own Bronx Brewery brews there, too.

Right now, they’ve also got an eggplant parm sandwich, along with an Italian sausage. And soon they’ll add a Chicago-style hot dog (vastly superior to ours, sadly).