A Hunger-Inducing Tome from the Guys Behind Luksus and Tørst 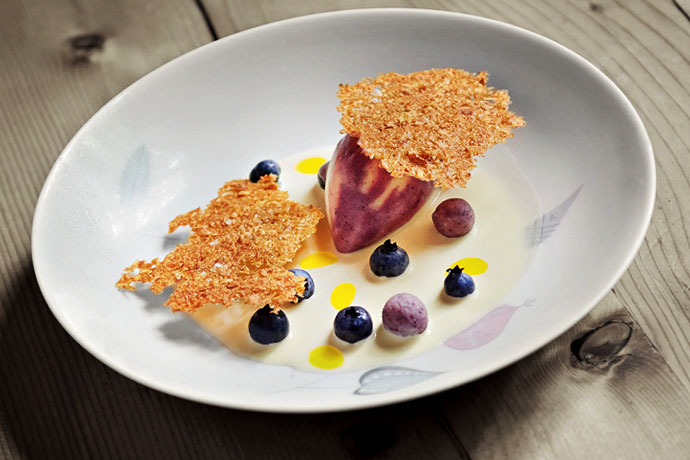 14 Photos Food & Beer
Jeppe Jarnit-Bjergsø is the man behind Evil Twin Brewing, and he heads up the beer bar Tørst in Brooklyn. He knows more about beer than most people know about their own relatives.

Daniel Burns is the chef at Luksus, the little gem of a Michelin-starred restaurant tucked behind Tørst. His résumé is an impressive read (Fat Duck, Noma, Momofuku).

Clearly these guys have a penchant for doing wonderful things together. So when they collaborate to put words on pages alongside pretty photos for the sole purpose of sharing their efforts with the world, it’s best to take note.

Food & Beer. That’s both the name of this new book and the overall concept here. Enclosed you’ll find 256 pages, 125 illustrations and 60 recipes to ogle, study and possibly even recreate, if you can make it past the ogling part.

It all starts with a foreword by René Redzepi, the Danish chef and owner of perhaps the world’s greatest restaurant, Noma. So, as you can see, this book is a very serious book.

From there, you get some background on Jeppe and Daniel before things move into beer, broken down by styles and characteristics like bitter, funky, sweet, sour and earthy. And throughout: recipes to make alongside those beers like a dry-aged ribeye with pickled ramps (Belgian Strong Ale) and a not-your-average meat and cheese plate (Berliner Weisse).

Then comes more food. A bunch of recipes covering snacks, starters, mains, broths and desserts—the kinds of dishes that can induce page-eating if you don’t keep your wits about you. Think snacks like lobster relish on a seaweed biscuit—you know, simple game-watching food—and eye-pleasing plates like squab with salted plum.

And then, with book in hand, you’re all set to begin making these dishes at home.

Though it would also look nice on your coffee table.