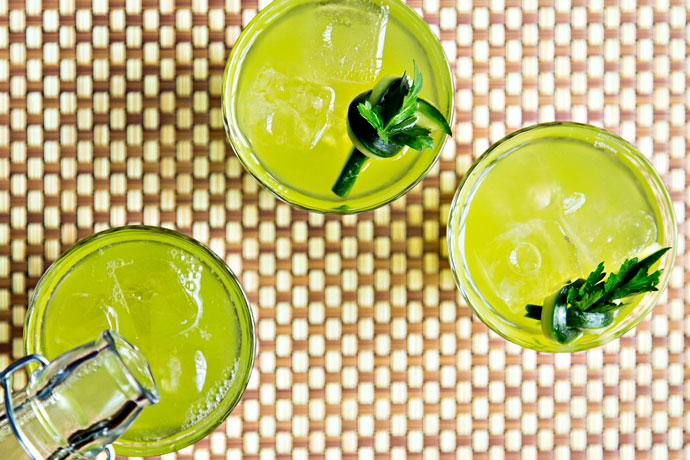 If the sun is currently shining upon you, congratulations.

If you’re currently sloshing through rain and enduring cold winds...

All other scenarios, yeah, same recommendation.

So we enlisted Derek Brown—renowned DC drinks slinger behind such bars as Columbia Room and Mockingbird Hill—to answer all our pressing questions about this communal beverage.

Technically speaking, what makes punch “punch” and not some other kind of drink?
There are a couple of answers, some based in history and some based on convention. For a long time I might have started with a history lesson, but that can be discouraging if you feel you need a college-level course on the British Empire to make a punch (for an awesome concise history, see David Wondrich’s book Punch). Punch is basically a large-format drink with spirits, citrus (or citrus peels), sugar and water. Trash can or punch bowl. I choose the bowl.

What are the best base spirits for concocting a springtime punch?
I would say gin nine out of 10 times, but rum and brandy are great, too.

What are some unusual ingredients that work surprisingly well in punches?
Raid your garden. I love fresh herbs in punches. Lemon verbena, mint, basil. They make great ingredients and garnishes. Depends, of course, on the punch itself. That’s why I mentioned gin.

Punch seems like a pretty democratic drink, ingredient-wise. Is there anything you absolutely should not include?
Good question. I agree, punch is very democratic. But I can easily think of one thing that would just send me the wrong way when you say punch: Fireball whiskey. That pungent cinnamon flavor is too overwhelming for the layered, refreshing taste of a well-made punch. Skip it. You want cinnamon, use the sticks. In moderation, of course.

How should we garnish the stuff? Throw a bunch of fruit in the bowl or just garnish each cup individually?
Generally, I like the former. Make the bowl beautiful. Freeze flowers in a ring mold, raid the garden for herbs, use lemons, limes, oranges. Then send the cup out garnish-less.

When was the golden era of punch?
Oh, I don’t know. Now. Actually, we’re in the platinum age.

I always remember this quote from the 1820s: “The man who sees, does, or thinks of anything else while he is making Punch may as well look for the Northwest Passage on Mutton Hill. A man can never make good punch unless he is satisfied, nay positive, that no man breathing can make better. I can and do make good Punch, because I do nothing else.”

So maybe the mid-19th century when the cocktail was already around but people took great pride (as evidenced above) in making punches. William Terrington’s Cooling Cups and Dainty Drinks came out mid-19th century with some of my favorite punch recipes.

That’s an inspiring quote. Got any favorites among those classic recipes?
Gin Punch à la Terrington.

Is there more to batching cocktails than simple math?
For the most part it’s the same, but some ingredients—such as bitters—tend to taste more intense the larger the dose, even when it’s technically the same measurements just on a larger scale. Also, you are adding water to a punch instead of shaking or stirring it to get dilution. That needs to be considered when adding additional ice.

About that ice: what should we be using?
Use a large block. How large depends on the size of the bowl. You usually find 25-pound blocks. I cut them with an ice saw or chainsaw (using vegetable oil for the chain) in fourths. That’s best. Otherwise, ice each serving as necessary.

Dipping your cup straight into the bowl... terrible etiquette or okay among friends?
Bad etiquette and generally makes a mess. Buy a ladle. They’re not very expensive. For the last cup, you can do what I call the astronaut shot. Drink from the bowl, turning it upside down until it’s covering your head.

What’s the greatest misconception people have about punch?
That it’s jungle juice or just bottled fruit juice with grain alcohol. It’s a holdover from their college days.

What’s a good ratio for ounces of punch to number of people? It’s safe to assume they like drinking. Okay, the people in question are really us.
I assume four ounces. Heavy drinkers at a party generally have two drinks per hour up to two hours and then may slow down. Light drinkers are one drink per hour and usually will stop after one or two. This assumes you’re not serving bartenders. That’s a different story.

Is a bowl really the best way to serve punch? What about a pitcher? Or one of those jugs with a spigot?
Yes, the bowl looks great. But, if you can keep a secret, we serve ours out of bottles.

Say we experience a cold snap. What makes a good hot punch?
Feuerzangenbowle, or flaming punch. It’s a mulled wine you light on fire. We do it every year at the Columbia Room for New Year’s Eve.

Ah, Feuerzangenbowle, of course. So while we worked on our pronunciation, Derek provided a couple recipes to try at home. These are those recipes. Gather some ingredients, find a large receptacle and apply as needed.

Combine lemon peel and sugar until it forms a paste (you may leave this overnight in the fridge or muddle until paste forms). Add spirits to mixture and stir until all solids are dissolved. Discard peel. Chill with ice and add seltzer to desired taste. Serve from punch bowl or pitcher. Yields 15 to 20 servings.

Build ingredients over ice and stir until combined. Because this mixture has a lot of water already from the vegetable juices, shaking is not advised. Garnish with a cucumber slice, parsley sprig, pineapple leaf or all of the above.

Blend all ingredients in blender or juicer and fine-strain to extract juice. Yields approximately 10 ounces.