One Writer’s Heartfelt Stance on a Well-Loved Icon 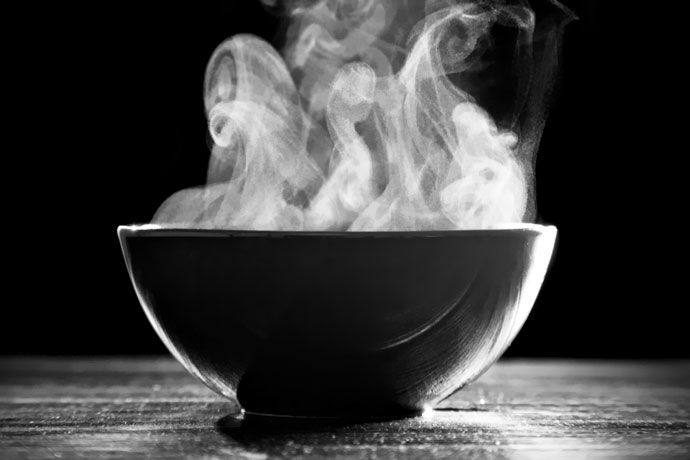 Upon learning that one of our own has a serious hatred for soup—that warming, rejuvenating hug in a bowl—we insisted that she defend her position. Because, seriously, soup?

For the most part, I’m a woman of easy temperament and varied tastes. I will eat everything from Argentine to Ukrainian, have cooked saag paneer from scratch and even tried hot sauce on a banana the other day. So I’m not one to cringe at unusual ingredients, unfamiliar ethnic cuisines or much of anything, really.

But there is one dish that I just can’t stand.

And considering it’s been cold the past several months, I’ve been surrounded by people singing soup’s praise. “Let’s get soup for lunch,” says a coworker. “You’re sick? I’ll send you chicken noodle soup,” says my mother. “Work on this article about soups that ship,” says an editor.

Well, I’ve had enough, and I can’t remain silent any longer.

Spoon-Feeding Is Weird
There are some exceptions. Like cereal. Cereal is great—it has texture. And ice cream? Of course. In fact, I’ll choose cup over cone any day. But soup is not ice cream.

I’m not a baby. I’m not elderly. All of my teeth are intact and I’m fully capable of chewing. So why are you liquefying my food? Eating soup reminds me of a toothless infant gumming zealously at a plastic spoon. I hear “Here comes the airplane” with every slurp.

I’m too old for that shit.

The Food Was Fine Before
You take some real food—say some squash or broccoli—and you cook it up nicely. Then what do you do? You turn it into paste and add water. Whose idea was this? Tender broccoli florets with a pinch of shredded cheddar on top: tasty. Green gruel with a curdled swirl of cheese: not tasty.

The Predominant Flavors Are Monotonous. And Sweet.
As part of a meal, some cooked tomatoes, squash, corn or peas are great. But in soup, everything’s overly sweet and one-note. I prefer my vegetables to taste like, you know, vegetables. Not like dessert. And then to experience that flavor over and over again for every bite... It’s like some pureed-vegetable-filled version of hell.

You Can’t Share It
And for me, going out to eat is a social activity where everyone shares appetizers and samples each other’s plates. Soup ruins that. There’s just no casual way to reach across the table and dip your spoon into someone’s lobster bisque. Quesadillas, flatbreads, chips and guacamole... now those are communal dishes. No one says, “Let’s share some soup as a starter.”

No one I’d be friends with, at least.