A New Drinks Tome from a Hollywood Bar Star 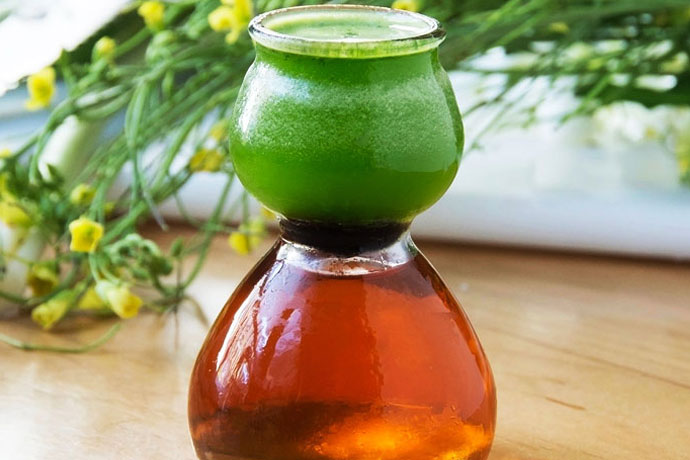 8 Photos Eat Your Drink
Matthew Biancaniello is to drinks what Alice Waters and René Redzepi are to dinner. Which is to say, a pretty big deal, and someone who takes it a step further than most with the whole fresh-and-seasonal thing. He bases cocktails around wild arugula, green zebra tomatoes, wild mustard flowers and other prime ingredients from LA’s farmers’ markets and mountainsides.

And now he has a book. So after some light reading, you can do all of that stuff, too.

In Eat Your Drink, the man who admits he had “barely any experience” before vaulting to notoriety behind a shaker at the Hollywood Roosevelt’s Library Bar promises that his “drinks follow a simple formula,” making them possible to recreate at home. That’s helpful.

The book starts out with a few bar snacks to make for your parties. Like recipes for blood orange chips with fig-bourbon jelly and grilled pineapple guava laced with blanco tequila. On the other end are meal chasers like Calvados-spiked Earl Grey tea and candy cap mushroom bourbon ice cream. So all that is nice. But bookended between is the really good stuff—the creative drinks that the bartender’s known for.

Cocktails include the vodka-spiked Smoked Persimmon and another with okra-infused cachaça and ghost pepper sea salt. Then there’s the juniper-laced Mezcal and Tonic, and one based around pumpkin juice that involves peanut-infused aquavit. Clearly these are not your average drinks, but each can be made on your own, without crazy equipment. Just as long as you’ve got a nearby farmers’ market, produce powerhouse or web connection at the ready.

So maybe a cocktail with uni puree or white truffle eggnog isn’t your thing. Then again, maybe it absolutely is. But you won’t know for sure until you try it. And with Biancaniello’s first published collection of recipes, now it’s much, much easier to try.