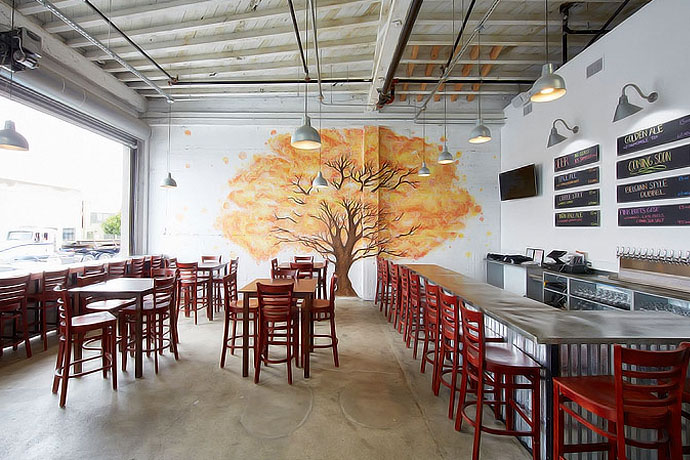 Great. Now you’re sufficiently in the mood for Laughing Monk Brewing, a new beer-having establishment in Bayview that’s soft-opening their shiny new taproom on Thursday. Here, have a look.

This is the kind of spot you’ll come to with a group after work. Or perhaps in the middle of a bike ride when you’d rather be drinking beer than riding a bike. You’ll stroll in, grab a glossy wooden stool at the metal bar and take in the brightness and the airiness of it all.

Beer, though. Beer’s why you’ll be there. They’ll have three of their own on tap, like the Sunshine Saison, a golden ale brewed with chamomile, and Midnight Coffee, an American stout made with coffee from Artis, a nearby neighborhood spot. They’ve got space for up to 16 beers on tap, so there’s plenty room to grow, too.

And as you sit there, you may find yourself thinking things like, “I wonder if they’ll have food delivery from Azalina’s Malaysian next month.” And “I wonder if there’s talk of a celebratory pig roast soon since one of the brewers happens to hunt wild boar when he’s not making beer.” To which we would say...

And of course he does.