We Investigate by Drinking Rum 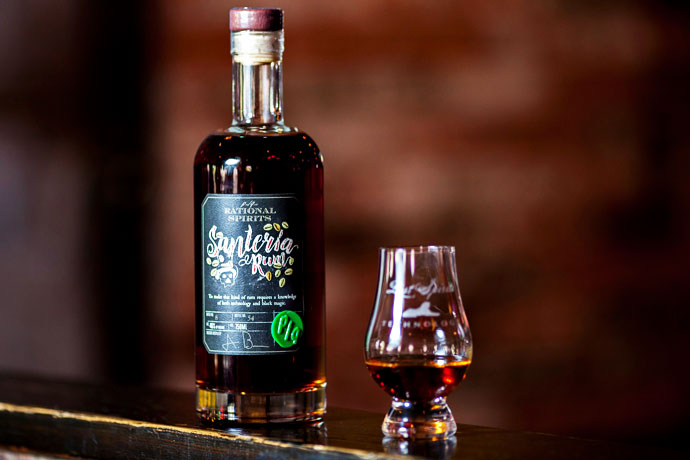 We’re lovers. You know that. But every now and again, something comes across our desks that requires extra scrutiny. And so we scrutinize, extra, for you.

THE CLAIM
Lost Spirits, a high-tech distillery in California, is utilizing a device called the THEA One to accelerate the aging process of liquor, thereby creating spirits in a mere six days that look, taste and smell as if they’ve been aging in oak for more than 15 years.

They’re still using oak—good oak, in fact—but rather than letting an unaged spirit sit inside a barrel to mature, they’re employing some serious science to force those same chemical reactions that occur between liquid and wood. Which means that after just a few days, they’ve approximated the flavors and aromas that would’ve been naturally extracted over a couple decades.

Independent labs and forensic scientists say that the chemical profiles of these very young spirits closely resemble the chemical signature of much older spirits. But we’re not the types to rely solely on the word of experts. No, we’re the types to engage in some good old-fashioned drinking and decide for ourselves.

THE INVESTIGATION
With a bottle of Lost Spirits’ just-launched Santeria Rum in the office, we engaged in some good old-fashioned drinking. Glasses were filled, opinions were opined, and requests for ice and refills were granted. Words like “woody,” “smoky,” “scotch-like” and “rum raisin” were uttered. Low whistles were whistled. And duties were thoroughly shirked as we focused our undivided attention on drinking rum.

THE CONCLUSION
The rum itself looks the part, pouring a dark hue in the glass. And the intense flavors of vanilla, caramel and wood could’ve certainly fooled us into thinking this was a much older, traditionally aged spirit. So while this stuff lacks the backstory and provenance we tend to appreciate, it seems like these guys are really onto something.

The THEA One begins shipping this month, so reserve one for yourself online (there’s currently a waiting list) if you want to start your own distillery or begin throwing really elaborate cocktail parties. But another option is to just leave the heavy lifting to the pros and be content drinking the end results—that rum and the forthcoming Rattleback Rye. It’s your call.

We’ll support you either way.