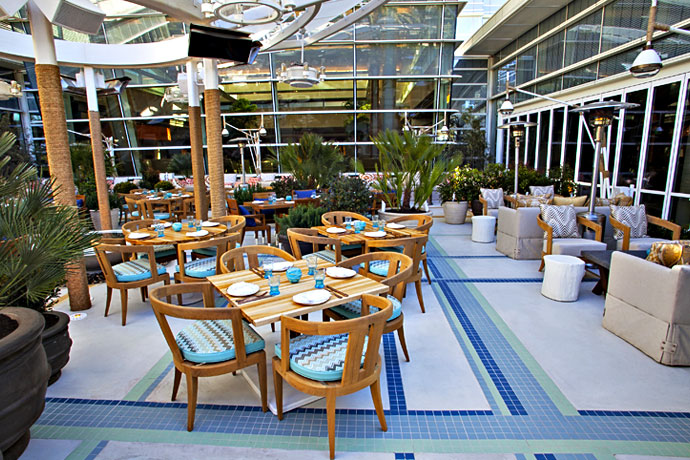 “Matt Damon has been spotted shooting the next Bourne movie at Aria. But sources say there’s been tension on set, due in part to Brian Malarkey’s very distracting new-to-Vegas seafood restaurant...”

And, of course, the very distracting restaurant is Herringbone—a lounge-like spot with a nice patio situation where the ocean’s glorious bounty comes directly to you. It’s open now on Aria’s second-floor promenade, and we promise these aren’t paparazzi photos.

A casual lunch on the patio.
Just you and a few friends, some colorful cabana chairs and a long wooden table. Oh, and Baja fish tacos, Maine lobster from the Salt & Brine Bar and a bottle of liquor to mix with fresh cucumber or grapefruit juice. That escalated quickly.

A lounge-style dinner indoors.
It’s like your living room, except with approximately 486% more seared yellowfin tuna and lobster-gouda mac and cheese. Also: 486% more whiskey drinks involving atomized truffle oil. Unless you make those at home.

The Jason Bourne option.
This is basically where you wake up with no recollection of having eaten all that mac and cheese.