Whistle While You Work

A Journey into the Heart of WhistlePig Rye Whiskey 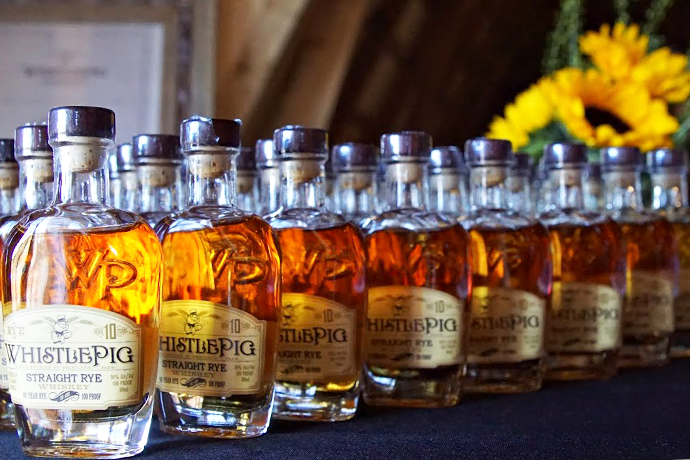 For millennia we’ve slandered the species by associating their very name with rudeness, overconsumption and serial frog abusers.

So it’s about time we began treating our porcine friends with a little respect. And a new 750-gallon copper pot still named in honor of a certain pig at a certain distillery named for pigs is a perfectly good place to start.

I’m referring to WhistlePig, the Shoreham, VT (population 1,265)–based maker of straight rye whiskey. WhistlePig has been in the game since 2010 and won acclaim in its first year by receiving 96 points from Wine Enthusiast—the highest rating they’d ever given a rye whiskey.

WhistlePig is located on a 1,300-acre ex-dairy-farm just a few miles from the eastern edge of Lake Champlain. Since their inception, they’ve finished and bottled their product on-site, with the actual whiskey being sourced from a Canadian distiller.

But the goal of WhistlePig’s founder, Raj Peter Bhakta, and its master distiller, Dave Pickerell, has always been to become a “grain-to-glass” distiller of rye. That means growing their own rye, distilling it themselves and finishing it in charred Vermont white oak barrels, all on this very farm.

The last step in this six-year process was completed in October, when the still became operational. And I decided this was a brown spirit development worthy of a five-hour bus ride, so I Greyhounded from Boston to see for myself what a self-contained whiskey ecosystem looks like.

A certain amount of character is evident in the WhistlePig brand. For starters, there’s their mascot, a Monopoly Man–esque swine brandishing a satisfied grin and a lit cigar. And then there’s their founder. Raj, the son of Irish and Indian immigrants, who has an official bio page that rivals those “Most Interesting Man in the World” TV spots.


Raj was a contestant on the second season of The Apprentice (fired by Trump on week nine) and ran for Congress in 2006. The page also describes him as an “expert on the military history of the Austrian empire” and refers to a volunteer stint in an Indian artillery regiment during an undeclared border war with Pakistan.

Somehow, all of this led to Raj purchasing a failed dairy farm in a remote corner of a remote state. Initially, he didn’t know what to do with the property. He first thought of beer (too complicated). Then vodka (too saturated). And then he settled on rye. He hired Pickerell, the former master distiller of Maker’s Mark, who had located a stock of single-grain Canadian rye whiskey that he felt was the best in the world.

That became WhistlePig’s first and flagship offering—the 100-proof 10-year-old rye whiskey. Since then they’ve released a 12-year-old expression dubbed Old World, which is a blend of ryes aged in port, Madeira and Sauternes barrels. 2014 saw a limited release of the 13-year-old, 118- to 124-proof Boss Hog. And their next project is the Vermont Estate whiskey. The first batch, made with rye grown on the farm, is slated for a release next year. That maiden batch, like the others, will be distilled elsewhere, but in the subsequent years will evolve into the “grain-to-glass” ideal Raj envisions.

I arrive at the farm around 4pm on a Saturday, the daylight already growing faint. I would be staying in the farm’s guest house, originally built in the 1820s. It’s a large, two-story structure that feels like a whiskey-themed clubhouse. There’s a chandelier made of spent, suspended WhistlePig bottles in the entryway and a framed series of fox hunt scenes hanging on the wall. Almost every room has a collection of WhistlePig whiskey and a wooden tray holding a few dozen tumblers. The pig motif is everywhere in the guest house, from bookends to the dish scrubber.

I meet Leo Gibson, WhistlePig’s general counsel, who’s known Raj since the two were friends at Boston College. Leo is already sipping from a tumbler and leads me upstairs to what’s known as the Rumpus Room. It looks like a generously budgeted rec room—there’s a pinball machine, a pool table and skis hanging from the walls. And the most magnificent home bar I’ve ever seen, with a collection of dozens of bottles gathered under a sign that reads “Prescriptions.”

Leo pours me a glass of Old World and some Madeira and port on the side to contrast it with as he tells me about WhistlePig’s background and their plans for a totally self-sufficient distilling operation.

“We really see this farm as a vision, as a model for others,” Leo says.

Later Raj joins us—he’s as gregarious as expected, even if his appearance is more restrained from the Google image searches depicting him clad in bow ties and go-to-hell pants. Later, Peter, Raj, Raj’s wife, Danhee, and I have dinner in town, which quickly swerves from a discussion of rye to a rye-fueled appraisal of Civil War generals, WWII and the fall and decline of the Roman Republic. It appears that Raj’s military history credentials are solid.

The next morning, Leo meets me after breakfast to visit the barrel room. But first we take a trip through the forest behind the guest house, passing an abandoned, ancient-looking school bus (“Hunters,” Leo says, adding that it probably saw use as a makeshift bar in a long-past deer season) and a full-size yurt Raj is having winterized. It’s a surprisingly steep hike with slick rock surfaces and a deep ravine to our left. “Raj’s commute,” says Leo. We pass maple trees—there are about a thousand on the property—some of which are tapped to produce a barrel-finished maple syrup sold under the WhistlePig label. Finally we reach a rye field, which lies adjacent to Raj’s more-modest-than-expected house.

Currently, 250 acres of the farm are dedicated to rye. It was planted in September and will germinate after the winter freeze, be harvested by August and eventually wind up in a WhistlePig bottle.

On the walk to the barrel room, we encounter some of the farm’s other denizens. There’s a pen full of enormous, curly-haired Mangalitsa pigs. I’d seen Mangalitsa listed expensively on menus, but never in the flesh. The titanic swine are occasionally used by WhistlePig for whole-hog dinners. There are also sheep and horses nearby, but none of them feel quite as keeping with the theme as the Mangalitsas.

At last we reach the barrel room, housed in an old barn. Here, untold gallons of whiskey enjoy a deep, wooden slumber. There’s a massive barrel that previously housed Tokaji, a Hungarian dessert wine. Leo pulls the plug from the barrel and uses a turkey baster to extract some maturing rye and releases it into a glass.

It’s remarkably sweet and spicy straight out of the barrel, like an amped-up version of the Old World. I’m told this may become part of a later Old World release or maybe something else entirely.

A Sauternes barrel receives the turkey baster treatment next, and it is considerably spicier than the Tokaji. After this, Leo begins pouring me drams from a series of bottles with improvised labels resting on a table in front of the barrels.

There’s a batch from an oloroso sherry barrel packing serious spice, and a 90-proofer straight from a Madeira cask. And then there’s the bottle mysteriously labeled “C,” which Leo can’t identify but fills my glass with anyway. I report that it is lighter and less full-bodied than the others, which leads Leo to suspect the influence of a white dessert wine.

Our final stop is the new still itself. It’s located in a 150-year-old structure that’s seen serious renovation. Some creative landscaping has emblazoned a giant “WP” onto the side of the hill the barn occupies, and an enormous American flag is draped above its doors.

The barn itself is huge and high-ceilinged, but it still feels like it can barely contain “The Mortimer.” That would be the 750-gallon copper pot still, made according to Dave’s specifications by Vendome in Louisville, Kentucky. It’s one of those beautiful, onion-domed stills that bring the spires of a Russian Orthodox church to mind. I’ve seen stills like this before, but never on such a scale.

But who, other than an inanimate copper still, is Mortimer?

When the brand launched, Raj had two beloved kunekune pigs name Mortimer and Mauve. They became a common sight at WhistlePig events, leashed on red carpets. But one day Mortimer ran afoul of the considerably larger Mangalitsas, and oinked his final oink.

It’s a lamentable tale, but its conclusion is anything but. Though his porcine life ended in tragedy, Mortimer’s second coming in copper is about to usher in an entirely new era for rye whiskey.

Is this the greatest monument man has ever dedicated to a pig?

I’m going to have to say yes.

Food & Drink
Look at You, Dry-Aging Your Own Meat at Home
Attain Unrivaled Steakhouse Flavor Right In Your Kitchen