This Place Has 90 TVs and a Jumbotron 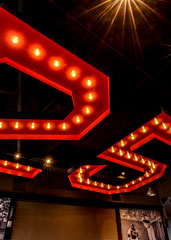 You can’t compete with Fenway.

But if some new place wants to throw a few pork belly burgers and a jumbotron out there to give it a shot... we suspect you’d allow it.

Cue the anthem for Tony C’s Sports Bar & Grill, a gargantuan shrine to a Sox legend that’s expected to open in that glorious blur between Christmas and New Year’s at Assembly Row.

On to the important stuff:

The number 25 carries some significance here.
It was Tony’s number. Hence the giant red “25” filled with marquee-style lights. And hence that #25 Burger with smoked BBQ sauce, crispy pork belly and a fried egg.

There’s a certified jumbotron.
This engineering feat required 50 55-inch flat-screens to be assembled together. Then they put a wraparound bar with 40 draft lines underneath it.

These Outdoor Excursions Are Vacations for Your Body and Mind

Nightlife
Hall Monitor
Southie, Meet All of the Beer and Whiskey

Nightlife
Inside Jok
A Rock-and-Roll Izakaya in Fenway